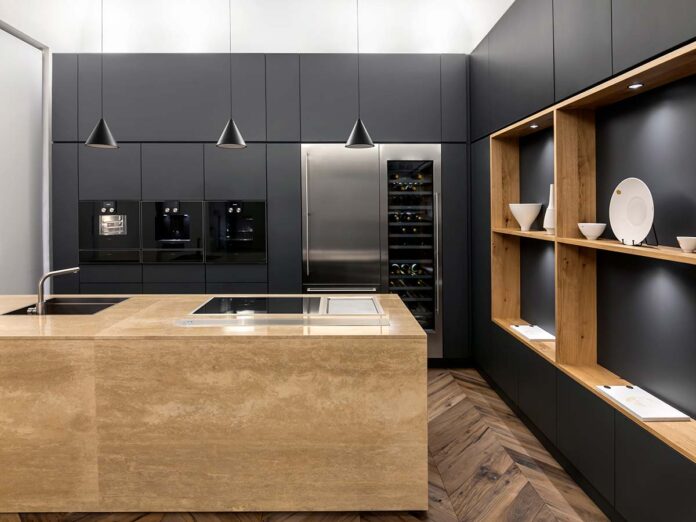 Italy-Gaggenau, a relationship destined to grow, two histories that intertwine. The brand’s first store in Italy was opened two years ago in Milan. Today the premium appliance maker reaches Rome, precisely in the Ghetto Ebraico, one of the most fascinating districts of the city. The space is the result of collaboration with the partner DesignElementi, while the design is by Alessandro Dal Monte of the studio Loop Design.

The designer has set out to underline all the qualities of Made in Germany embodied by Gaggenau, creating the store as a true house subdivided into two spaces reflecting the two focal points of the brand: culinary culture, with professional-grade built-in appliances for the home, and an exclusive style, based on a refined linear aesthetic.

The red thread that links the two zones is a warm atmosphere created by colors and herringbone wood floors, combined with travertine, a typical Roman material.
The ‘live cooking’ area features the top of the Gaggenau 400 Series: the Full Induction CX482110 range and the Teppan-Yaki grill are set into the travertine top of the island, together with the telescopic AL400191 exhaust system, while at the walls the high-performance ovens of the 400 Series and the Vario Cooling combo with refrigeration and climate-controlled wine storage are on display.

The ‘lounge’ zone contains the EB333 oven, an iconic 90-cm model redesigned for the brand’s 333rd anniversary; the columns of the 400 Series ovens with steam and microwave functions; the Vario 200 and 400 cooktops; and the VarioCooling wine cellars with a width of 60 cm

The showroom will not be just a gathering place for sector experts, but will also offer a calendar of different events and experiences, including art projects, talks and conferences on the world of architecture, music & wine lounge evenings and signature dinners.

Starting with the collaboration between Gaggenau and Sabino Maria Frassà, artistic director of CRAMUM, the non-profit project created to support artistic excellence in Italy and abroad: the space will host works by the Roman artist Alberto Di Fabio.

Tubes and the Amalfi tradition: a welcoming contrast

In Naples, interiors made to measure

The art of bringing life to metal through expert c

A once-in-a-lifetime experience that deserves all

An icon of the tradition of hospitality in Morocco

@giorgettiofficial lands in London with its first

Thanks to a perfect combination of fine craftsmans