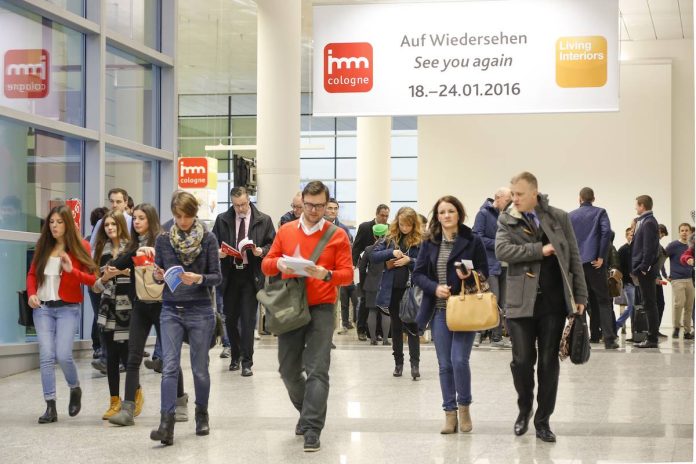 imm cologne has just drawn to a close, this being the year’s first appointment dedicated to interior furnishings and a landmark for manufacturers, retailers, architects, designers, buyers and decision-makers from all over the world. This year’s edition ran alongside LivingKitchen, an event entirely given over to kitchens, built-in domestic appliances and accessories.

Over 1300 exhibitors from 50 countries took part in the event and occupied the entire Koelnmesse infrastructure, from Hall 1 to Hall 11, which extends over a surface area of 260,000 square metres, attracting around 146,000 visitors from 138 countries, comprising as many as 102,000 trade operators.  Of the latter, 56,000 came from Germany and approximately  46,000 from abroad (+13% compared to last year).  Among European visitors, the most remarkable increases were those of Spain (+27%), the United Kingdom (+20%), Italy (+ 11%) and the Netherlands (+13%). Satisfactory attendance figures were also registered for France and Poland but, probably due to the delicate political situation at present, the number of Russian visitors was lower than usual. With regard to non European countries, there was an excellent turnout from China (+ 32%) and from the United States which registered an outstanding + 47%.

However, the cosmopolitan spirit distinguishing this event was not limited to the trade fair compound. This entire city, located on the river Rhine, was involved in the fair and came to life for a week with events dedicated to International interior design and its most innovative proposals. From the Design Post to the various showrooms scattered around town, each location offered an opportunity to familiarize with furnishing brands. In particular, the Design Post, a former post office sorting centre that has now been completely made over, is a particularly impacting space close to the trade fair hub which hosts top International brands on a permanent basis.  Thanks to its proximity to the Koelmesse, this space becomes a natural attraction for visitors to the fair.

The Dutch Touch in an international context

How the selling way is changing