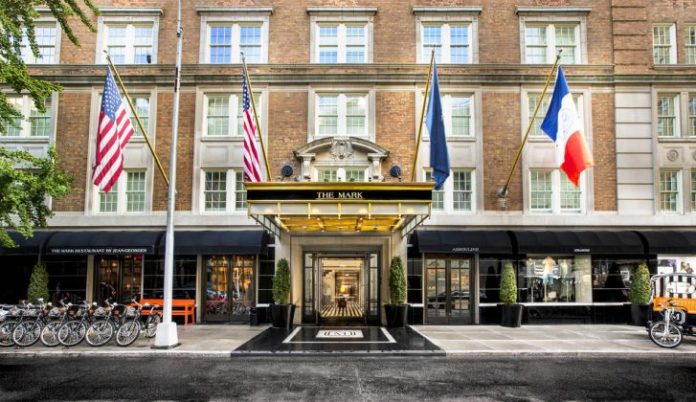 For clarity, let’s start with the Merriam-Webster definition of a penthouse: “an apartment on the top floor of a residential building or hotel”. This definition fits (even though it is somewhat narrow) the Mark Penthouse, an apartment (perhaps ‘residence’ is more appropriate) on two levels with a terrace, at the top of the historic building, constructed in 1927 in Madison Avenue, that houses The Mark, a true New York classic. It does not require any hyperbole to describe the hotel and especially the recent Penthouse, opened to the public in September 2015, because it simply “is” hyperbole. From the appeal of the legendary Manhattan address near the MET, the Guggenheim, the Frick Collection and the Cooper-Hewitt, to the numbers that make it the biggest penthouse suite of any hotel in the United States: its 1,100 sq m space encompasses 5 bedrooms, 4 fireplaces, 6 bathrooms, one of which features a Turkish bath, 2 bars, 2 wardrobe rooms, a professional kitchen (designed by Piero Lissoni for Boffi), a dining room for 24 people, a living area that can be transformed into a reception room, a library and a furnished 230 sq m terrace with views of Central Park and a winter garden. Last but not least, the French interior designer Jacques Grange, a true celebrity, oversaw the interior design, first with his modernization project of the entire hotel in 2009 and more recently for the Mark Penthouse, blending elegance and simplicity with a contemporary, international style featuring American technology, expansiveness and comfort.

Renowned not only for his innate talents but also for the names of his clients, during his long career Grange has furnished the residences of Yves Saint Laurent and Pierre Bergé, Isabelle Adjani, Carolina di Monaco, Alain Ducasse, François Pinault, Robert Agostinelli, Valentino and Karl Lagerfeld, as well as Colette’s apartment, which he has chosen as his own home in Paris. For the Mark Penthouse, a ‘boundless’ living space, he opted, as an antithesis, for a design based on the concepts of rationality, moderation and proportion. Colors, materials, furniture and objects are perfect in themselves, but find their utmost perfection in their relationship with the large spaces and within the various, meticulous furnishing compositions. However, in the midst of all this rationality there is a touch of Deco madness in the bathrooms, from the optical decoration of the floor to the vintage green shades of the walls and the furnishing system with a double sink.