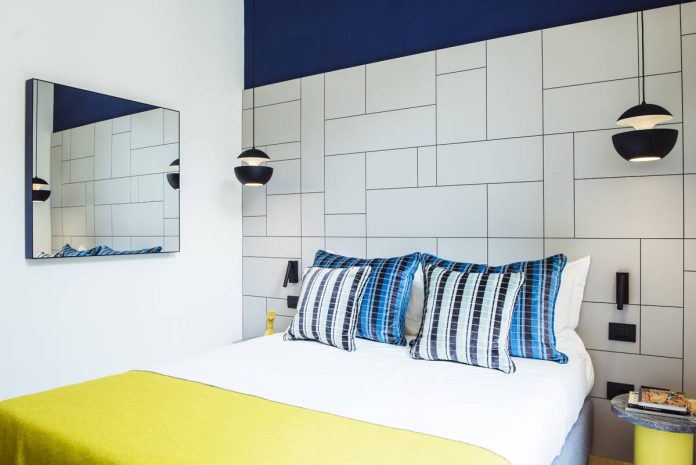 Near Palazzo Strozzi, 400 metres from the Uffizi Gallery and Ponte Vecchio, Milu Hotel lies in the cultural epicenter of Florence, a short walk from the city’s best restaurants, bars, cafés, art galleries, museums and luxury shops. Milu Hotel (opened last October) is set in a location with ancient roots, with a documented history that dates back to 1400, when the building housed a series of private homes that belonged to aristocratic and bourgeois families, such as the Strozzi and Minerbetti families. The ground floor was once home to Café Doney, famous for its high-quality ice cream and hot chocolate, which was very popular with the Florentine bourgeoisie, aristocrats, politicians and writers until it closed in 1989.

The new project, which unites style and elegance, was overseen by the DO studio/architect David Ohayon in collaboration with Carmel Ilan & Matteo Baroni.
The building’s five floors are connected by an early 19th century staircase that transforms into a constantly evolving exhibition space with artwork (for sale) by international artists. All the works were selected by a dedicated team of curators. They include an installation by Maya Gelfer entitled RISE!, which represents the suspended movement in mid-air of a flock of birds that are unable to fly, the Hourglass video installation by Ronen Sharabani, Pool by Galia Gur Ziv as well as the Nuts works; Strelitzia; Explosion; and Passion Flower by Carmel Ilan, the designer of the hotel.

Every room, characterized by a custom color palette, features a playful, minimalist style, warmed by the wooden parquet floors and by the exposed beams on the ceiling, with furniture and lighting by famous Italian brands such as Moroso, with its cheerful Shadowy armchair that dominates the balconies, Rimadesio, Minotti, Desalto, MDF Italia, Molteni, Magis, Bonaldo and Glas Italia with its mirrors from the Cosmos collection, designed by Nanda Vigo and Danish designer Gubi.
Breakfast served in the Library Lounge and views of the bustling Via de’ Tornabuoni from the terraces of the rooms are just some of the privileges offered to guests, as well as a highly professional, specialized concierge service that can provide all sorts of information related to art, gastronomy, fashion and music in Florence.

The first André Fu boutique: an ode to Japanese aesthetics