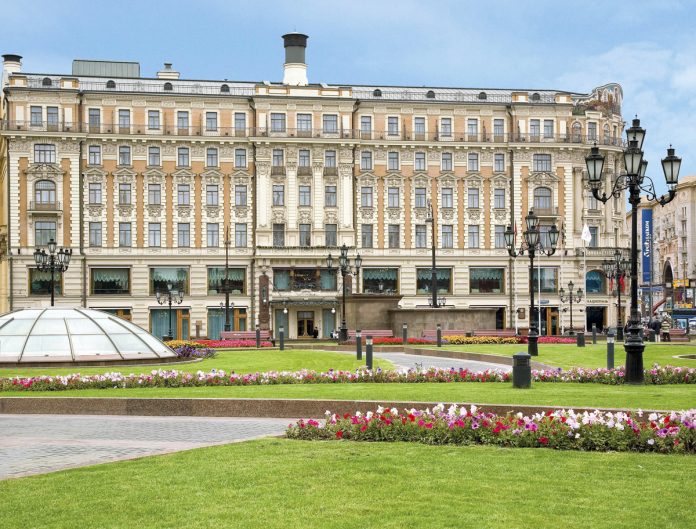 With Moscow gearing up to host the 14th edition of the Salone del Mobile.Milano Moscow, many visitors to the event will be staying in three city-centre hotels: the Lotte, the National and the Mercure. When they do, they will discover luxury hotels housed in buildings of great architectural importance, dating back to the early 1900s.

The luxurious Lotte Hotel Moscow on Novinskiy Boulevard opened in 2010. It is home to 300 large rooms and includes the largest Royal Suite in Russia at 490 square metres.
Yet there is a little bit of Italy here too in the form of one of the hotel’s two restaurants. Launched just over two years ago, OVO by Carlo Cracco is the Michelin-starred chef’s first restaurant outside of Italy. Guests can also sample modern, cutting-edge Japanese cuisine at MEGUmi.
Well worth a visit is the famous Mandara Spa, which combines ancient Balinese spa traditions with the latest cosmetics from Elemis and Bellefontaine. Lotte Hotel Moscow is part of The Leading Hotels of the World, the biggest chain of luxury hotels, resorts and spas in the world.

Built in 1903 by the famous architect Alexander Ivanov, the National has been a historic fixture of the city for over a century.
The hotel has played a leading role in a plethora of historic events, not least the October Revolution on 1918, which saw it renamed the First House of the Soviets. During the Second World War, meanwhile, the building was used as a base for the anti-Nazi coalition.
In September 2009, after extensive restoration to all communal areas, rooms and suites, the National became part of Starwood’s Luxury Collection of over 70 hotels in more than 30 countries around the world. The historic grandeur and sober elegance of the National are offset wonderfully by the hotel’s ultra-modern creature comforts.
Each of the 202 rooms is kitted out with exclusive furniture inspired by the hotel’s past, while the 55 suites are adorned with rare, authentic Russian antiques including vases, lamps, mirrors, statues and paintings.

Last but not least, the Mercure Arbat Moscow opened in 2011 in the city’s elegant artists’ neighbourhood, Khamovniki. Smaller than the other facilities listed here, this boutique hotel is home to 109 rooms and is located a stone’s throw from Smolenskaya, the historic underground station. Designed by the architects I.Ye. Rozhin and G.P. Yakovlev, the station was built in 1953 and features huge squared pillars in white marble, decorative cornices and ventilation grills hidden by ornamental features. Behind one of the platforms is a low relief by G.I. Motovilov entitled “The Defenders of Russia”, which depicts the soldiers of the Red Army in battle.

The world in a room