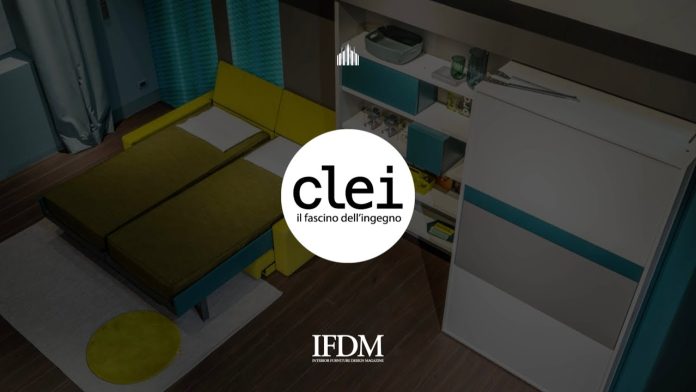 By its very nature, the furnishing sector has always been open to influences, contaminations and references and therefore changeable in terms of colours, shapes, sizes, materials and compositions. However never before have lifestyle changes been so palpable in home interiors as they are today. Not only in terms of aesthetics, but also liveability, a term which has come to refer to a more widespread transformation of urban spaces, family forms of life and consequently, living space uses.
This is the starting point of project considerations operated by Clei which since its foundation in 1963, has been attentively and promptly embracing changes throughout the world, translating them into functional and effective furnishing solutions. Luca Colombo, the company’s Sales Manager explains, “Research conducted by prestigious universities informs us that our cities are based on outdated rules conceived during the 50s which have since become obsolete due to drastic social changes under way, this is why they require adaptation, they need to shed their skin.” Cities are being repopulated by means of large scale migratory flows inspired by a search for a better quality of life. Work environments have become smart and mobile thanks to technology which enables us to work wherever and at any moment, including at home, thus expanding its original function to embrace productivity, learning and acquisition”. But there is more. Luca Colombo continues: «We are witnessing the creation of so-called Smart Cities, which are having to come to terms with actual space available for urban development. Therefore, homes are smaller and as such must be fitted with all comforts and studied right down to the smallest of details.
We must also take ‘single’ families into consideration insofar as according to Istat data, they make up a third of the total population”. This is where Clei and its “intelligent and convertible home” proposals come into their own, centred around the interaction between individuals and furnishing objects. Large elements are transformed, revealing numerous functions and uses, thus multiplying space, going so far as to create an additional room in some cases. The Promoter of this living concept and the first company to explore the complex world of transformable furnishings, Clei has focused its expertise on Research and Development. It has obtained numerous patents, based on a process combining technology and design, without shunning the issue of eco-sustainability (by means of the meticulous selection of materials and energy saving).
This is how integrated convertibility projects are created, in the words of the Sales Manager, “the organisation of furnishing based on an innovative interpretation of use functionalities”, such as Kitchen Box, a mini-kitchen which consists of a single linear and modular unit connected to a swivel door system which opens out like a book and also conceals the kitchen according to needs. Then there is Oslo, the sofa integrated within a dual function transformable system, with a hide-away pull-down double bed.
The convertible system Kali can be equipped with a single (90 cm) or medium sized (120 cm) hide-away bed, which can be matched with the chaise longue Miguel, featuring a flippable back, perfect for positioning beneath the bed contained in the transformable systems Kali and Altea.