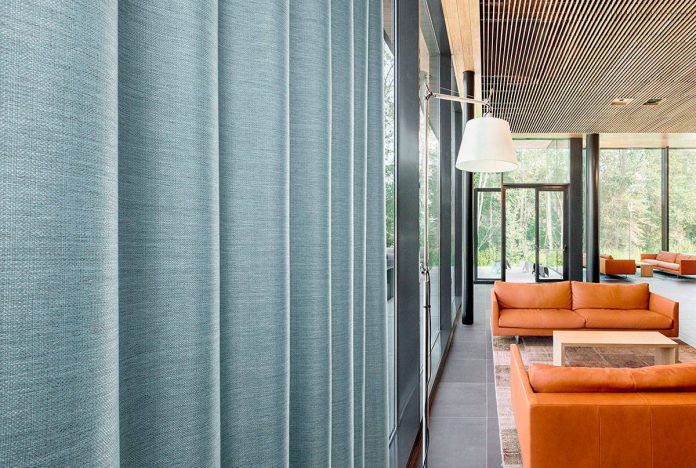 It’s not always obvious, but surfaces also have their own “architecture”.
The more you work on the creation of surfaces, the more you focus on their structure, which is complex and has an architectonic, three-dimensional aspect. Within the context of an interior design project, some materials, including fabrics, are often considered as purely decorative elements, but the truth is that they actually contribute towards creating the interior, its atmosphere, expressing a close relationship with the aesthetic and functional whole, especially in public places, where often fabrics resolve concrete problems, such as acoustics or hygiene. In addition to studying their complex structure, I also like to consider fabrics as architectonic surfaces, because it’s about more than just decoration or personal taste, it’s about the value of materials in space, down to the smallest of details.

Fabric surfaces in particular may be influenced by the latest trends.
Precisely in public places, such as hotels and restaurants, frequented by people from all over the world, today we can no longer speak of simple trends, often mere flashes in the pan. Rather than trends, it’s better to speak of zeitgeist, of how thoughts and places transform over time: for example with colours, which change every 10-15 years, it’s a slow transition which depends on many external factors, on what is going on in the world, our perceptions.

Does transformation also depend on the evolution of materials?
A lot has changed in the materials sector, there is more choice and specialisation, but there are also higher user expectations and greater sensitivity with reference to the quality and potential of materials.

In observing Vescom products it becomes clear that the fabric cover creation process is an extremely laborious one.
Yes, the hard part is not so much thinking up ideas, but transporting them into a material which is effectively replicable and usable. What I appreciate about the Vescom collaboration is the chance to study material: a very lengthy process occurs after initial inspiration, fraught with prototypes, the definition of characteristics such as proportions, size, tactility, as well as an extensive testing process, culminating in an aesthetically refined material that is suitable for heavily frequented places. It is a hidden labour, often taken for granted, despite its extreme complexity and specialised nature.

The lounge soul of Lapalma

The Salone del Mobile.Milano Moscow is back for the 14th year...