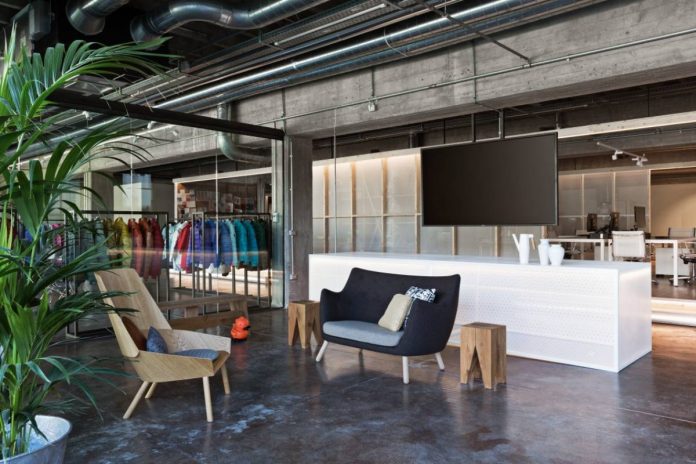 It was no surprise that The Box produced a vibrant, cutting-edge design for the new offices of Forest, a company that owns the animal-friendly down jacket brand Save the Duck, which is now headquartered in La Calabiana in Milan, a well-known printing works in the city. On the one hand, it is a hotbed of design expertise resulting from the partnership between Spotti and the Colmanni + Minerva firm, as well as from an outstanding selection of suppliers and partners. On the other hand, it boasts the pioneering spirit of a company founded in 1914 that has steadily grown thanks to its long-term entrepreneurial vision, which is now guided by the third generation headed by Nicolas Bargi.

This fusion produced a work space – around 800 sq m on the building’s bottom floor – that is open and fluid to facilitate collective work. Here, the various departments dialog seamlessly and, for this very purpose, there are virtually no masonry or blind partitions, which have been replaced with diaphragm elements that allow you to see the whole of the environment from every perspective. The headquarters houses the executive, commercial and style offices, the company’s large historic archive and the showrooms of the Ganesh and Save The Duck collections. The heart of the space is represented by the style office, which is located right in the center of the building, while once again emphasis is placed on the refreshment-meeting area, which is equipped with a large open kitchen that joins the meeting/media room. The utmost attention has been paid to materials and finishes, which are all natural or recyclable, and the original smooth concrete floor has been preserved. There are still distinct signs of the pre-existing brutalist architecture: visible iron frames mounted with glass partitions that divide the areas and metal grids of various shapes and sizes, painted white on fir-wood frames, which also serve as partitions. Part of the minimal furniture was directly custom-made by The Box and the rest was selected. Finally, the offices feature three types of lighting: the existing ceiling lights with T8 fluorescent bulbs, precise lighting for single areas and ‘signal’ lighting for the most attractive routes and single architectural elements. Track projectors were used here, along with suspensions with prismatic diffusers and light lines, all with 3000K LED bulbs.

Between progress and amarcord