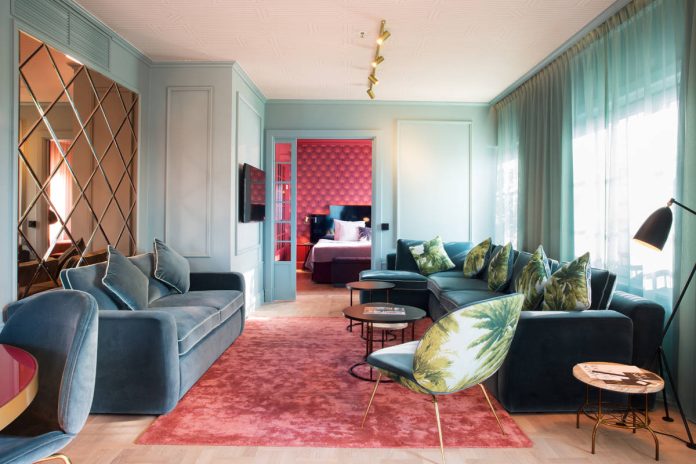 Haymarket, Hötorget in Swedish, is a central square in Stockholm that hosts the daily fruit and vegetable market and is overlooked by two famous neoclassical buildings, the Konserthuset, the concert hall, and opposite, the PUB department store, which became the Haymarket by Scandic hotel in 2016. Located in the heart of the city and imbued with its history, the hotel preserves and enhances its sophisticated ‘20s atmosphere, which has been reworked with a contemporary interior design project coordinated by the Koncept firm. With 405 rooms, 16 suites, the Paul brasserie restaurant, Gretas Cafè, Americain bar, event hall for 600 people, small cinema and rooftop terrace, the Haymarket has numbers comparable to major hotel chains, but the inspiration and charm of signature hotels. The inventions and style of the Roaring Twenties are the inspiration for the entire architectural renovation and interior design concept: Art Deco graphics and ornaments unite the lobby and the rooms, with brass balustrades and gilding, hypnotic patterns on the wallpaper, carpets and cabinets, angular combinations of black and white bed linen, dense and velvety colors such as the soft velour that covers the padded furniture, part of a colour scheme that ranges from powder pink to vermilion, purple and sage. The interior features many pieces of furniture and lighting custom-made by firms such as Gubi, notably a version of the Beetle Chair with palms, Sika Design, Rubn, Frandsen, &Tradition, which created the crystal chandelier by Samuel Wilkinson for the lobby. Here a wall panel shows scenes inspired by black and white classics, a reference to the atmospheres of films that you can experience when you enter the elegant mix of past glamor and the creative energy of the present.

A colonial soul and modern spirit