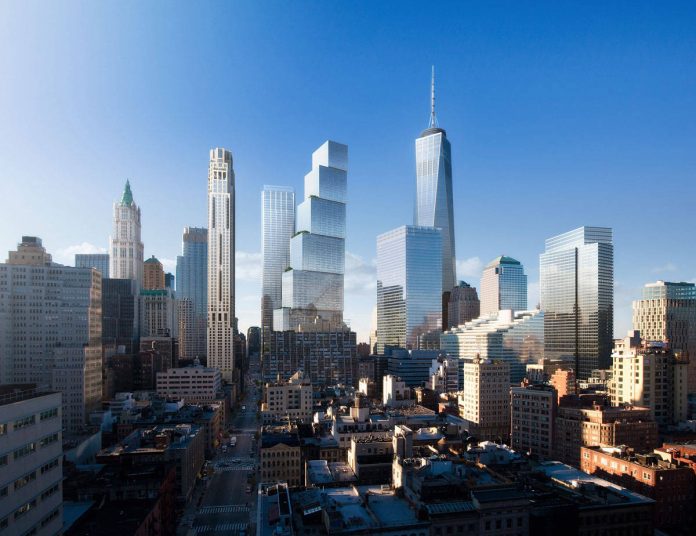 2 World Trade Center is the fourth and final tower planned for the redesign of the former Lower Manhattan site, alongside One World Trade Center by Skidmore, Owings and Merrill, Four World Trade Center by Fumihiko Maki, which has already been built, and Three World Trade Center by Rogers Stirk Harbour + Partners, which is currently under construction. Designed by BIG, which replaced Foster + Partners during the construction phase at the behest of the client, Murdoch, the skyscraper was not conceived as a linear structure, but as a hybrid tower composed of seven structures in varying sizes stacked on top of each other, with the largest at the base and the smallest at the top. This configuration, which reworks the ‘ziggurat’ design of the first skyscrapers in New York, aims to mediate between the different architectural styles of the two neighboring districts: the Financial District with its high-rise glass buildings and the TriBeCa with its lower, heterogeneous residential buildings. 21st Century Fox and News Corp will occupy the lower part of the tower from 2020, which has over 80 floors, while the upper parts will contain other office spaces, tailored to the needs of the occupants like buildings in their own right. At the base, a giant entrance hall will directly connect to a shopping center and to the transit hub designed by Calatrava. The building’s interior features continuous open spaces, large stairwells and double-height volumes for the common areas. It is designed to encourage links between the different sectors, interaction and the exchange of ideas. Not only indoors, since the different buildings have vast garden terraces, which are rich in vegetation.

A curved presence over the High Line