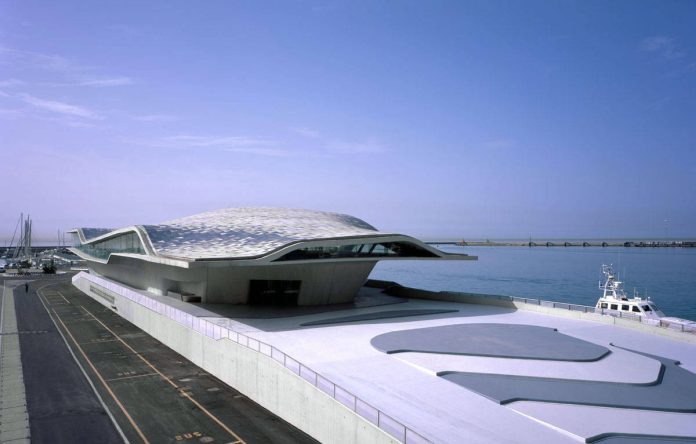 Zaha Hadid Architects completed the new Salerno Maritime Terminal, inaugurated on the 25th of April. «This extraordinary work adds to everything Salerno is doing to transform itself and I think it is marvellous. It is also a way of remembering the great architect that Zaha Hadid was», the Premier Matteo Renzi said.

The Londoner Studio won the international competition to design the new terminal at the beginning of the new millennium, as part of a 1993 plan which aimed to regenerate the city through social, economic and environmental projects; the regeneration plan begun by the former mayor Vincenzo De Luca – now governor of the Campania Region – and continued under the current mayor Vincenzo Napoli.

The new maritime terminal strengthenes the traditional relationship between Salerno and the sea, connecting the rich maritime customs with the historic urban fabric and beyond the hills that frame the city. Located on the public quay that extends into the working harbour and marina, the creation has an oyster shape with an hard, asymmetric shell that proctects the softer elements within. Moreover, it is able to protect the passengers from the intense Mediterranean sun during the turist season, that attracts numerous visitors for the beauty of the Region.

Reflecting the iconic Zaha Hadid style, the massive structure of the building follows smooth lines even if prefers materials as – firstly – concrete, and also glass, steel and wood. It is composed of three primary interlocking areas: starting with the administration offices for national border controls and shipping lines, follows the terminal for international ferries and cruise ships and finally the dedicated area to the terminal for local and regional ferries.

The project gives special attention to passengers, not only raising them to the embarking level of large ships and ferries while they are leaving, but also helping to orientate them; the interior arrangement leads passengers through a sequence of spaces that flow into each other and are organised around focal points such as the restaurant and the waiting lounge.

The Maritime Terminal operates, both functionally and visually, as a smooth transition between land and sea, while offers spectacular view of the Amalfi Coast, the Gulf of Salerno and the Cilento. As a lighthouse, the glow of the terminal near the harbour entrance welcomes the passangers, which will increase up to 500.000 each year; the new terminal would create up to 2.000 new jobs in the city’s hospitality, services and retails sectors, positive affecting on the 1993 plan.

A welcome in French style

Urban farming in Milan and Turin