The first company to create shower heads built into the ceiling. The year was 2011. Since then, Antoniolupi hasn’t rested on its laurels. The research has continued, discovering new solutions, and other new developments have followed that initial debut, with the sole aim of keeping faith with a corporate dictate, summed up by Andrea Lupi: “We feed on innovation.”

In the second generation at the helm of the company specialized in bathroom furnishings, together with his siblings Nello, Patrizia and Sergio, Andrea Lupi moves forward with an ideal of design in a continuous state of becoming, constantly reaching beyond existing achievements. “We are always on the lookout for stimuli, ideas, contaminations. Our goal is not to follow the evolution of fashions and trends, but to foresee them.” After having created a total look system through collections for the bath environment and elsewhere, Antoniolupi has expanded its focus from interior design to an architectural approach.

Making use of the architectural setting, the company has developed a new type of product, the built-in shower head, generating novel possibilities in the context of projects: the first, Meteo, in 2011, designed by Nevio Tellatin; and the last, 9 years later, Raindrop created by the studio Calvi Brambilla. In between, a sequence of products that fit this category, but case by case convey a new expression of wellness in the shower.

Meteo changes the conception of the traditional shower head, offering a built-in system with a square or rectangular form capable of discreetly inserting itself in the host context, emphasized only by the LED lighting, which together with the large perimeter rainfall effect, or concentrated in a cascade of water, gives rise to an intense dialogue between the parts. The evolution of the product happened quickly, with the arrival of Meteo_XXL (in the extra-large version containing not only the traditional and dual-cascade modules, but also 4 vaporizers and a perimeter heat barrier), FuoriMeteo (featuring a volume that emerges from the ceiling), Meteo_IN and Meteo_OUT (both with a circular form, wrapped in a ring of light; the first has the appearance of a disk perfectly built into the ceiling, while the second suggests a sort, organic volume that protrudes from the ceiling). 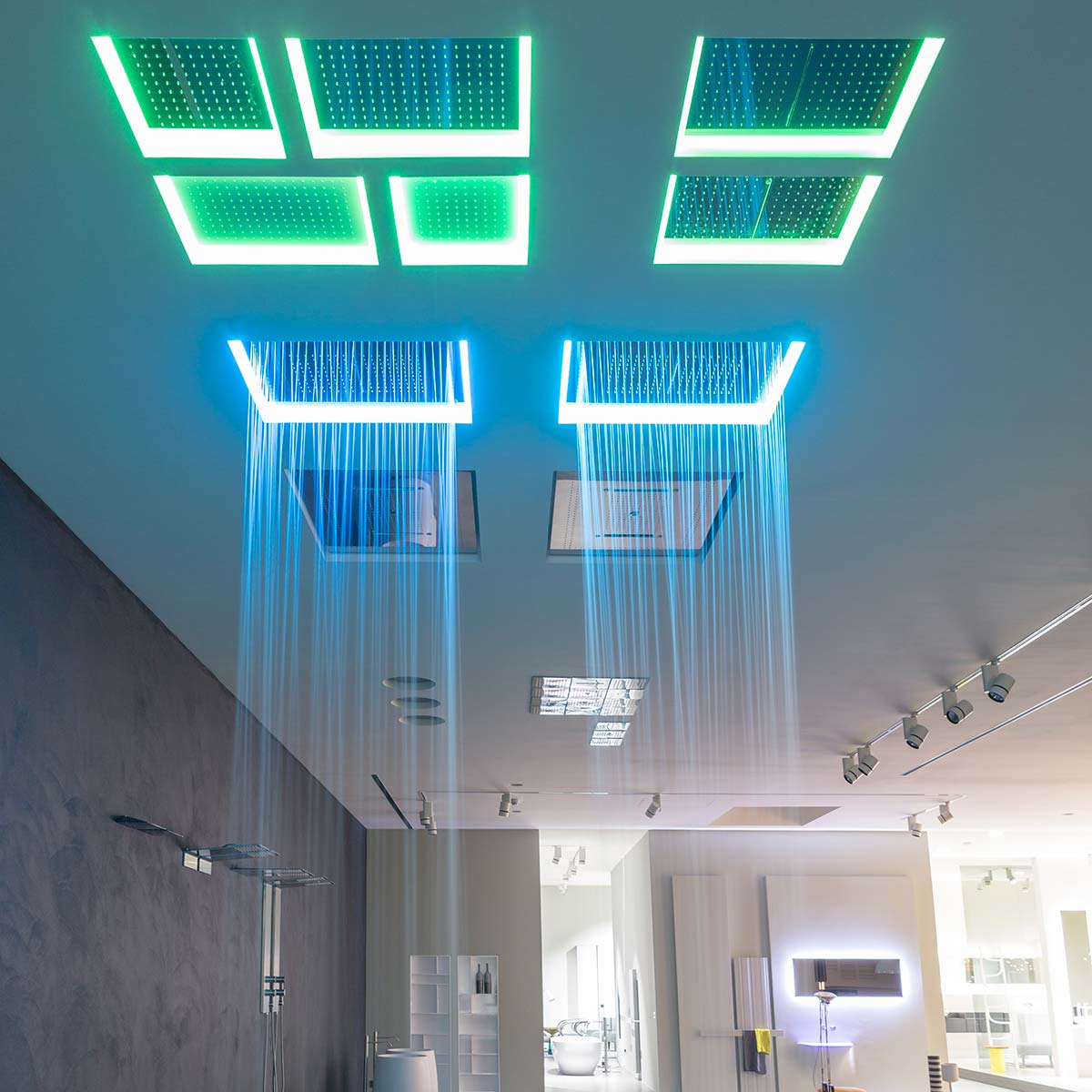 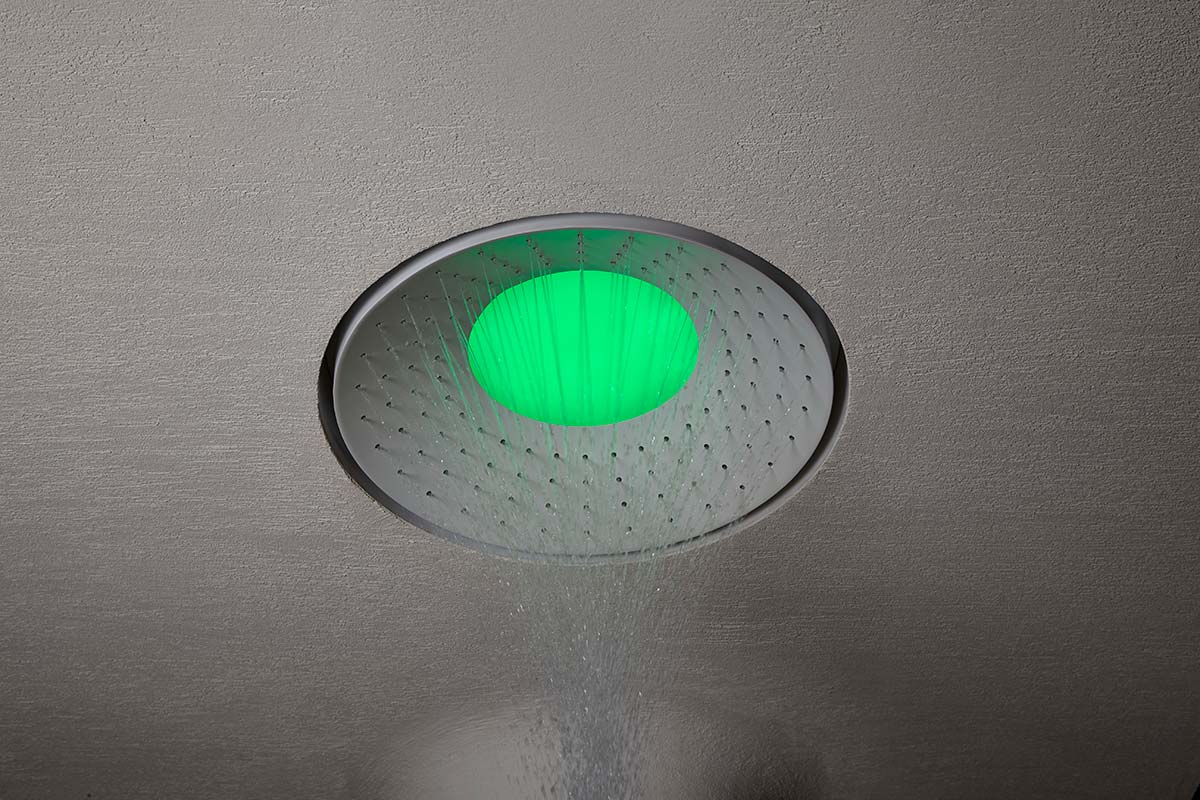 Riding the wave of color therapy, Antoniolupi has launched Lumen (designed by Marco Pisati): a shower head with a colored central core, around which to arrange nozzles gathered in a semi-spherical cap from which a jet of water is emitted towards the center. An ideal corolla of relaxation that combines the beneficial effects of water and color. Precisely the mixture of different sensations is the terrain on which the brand concentrates its efforts – together with the designer Nevio Tellatin – to create LaMattonella: a track that contains different elements (cascade, rainfall, rainfall with nail) in a single head featuring a personalized grille.

Marco Pisati returns to the color therapy theme with Iride, remarkably amplifying its theatrical effects. Unlike all other shower heads, Iride has been designed first of all as a lighting fixture, a lamp with a cylindrical volume that uniformly spreads light in all directions; around it, the shower ring wraps the light source, which dematerializes the spray into multiple colors. 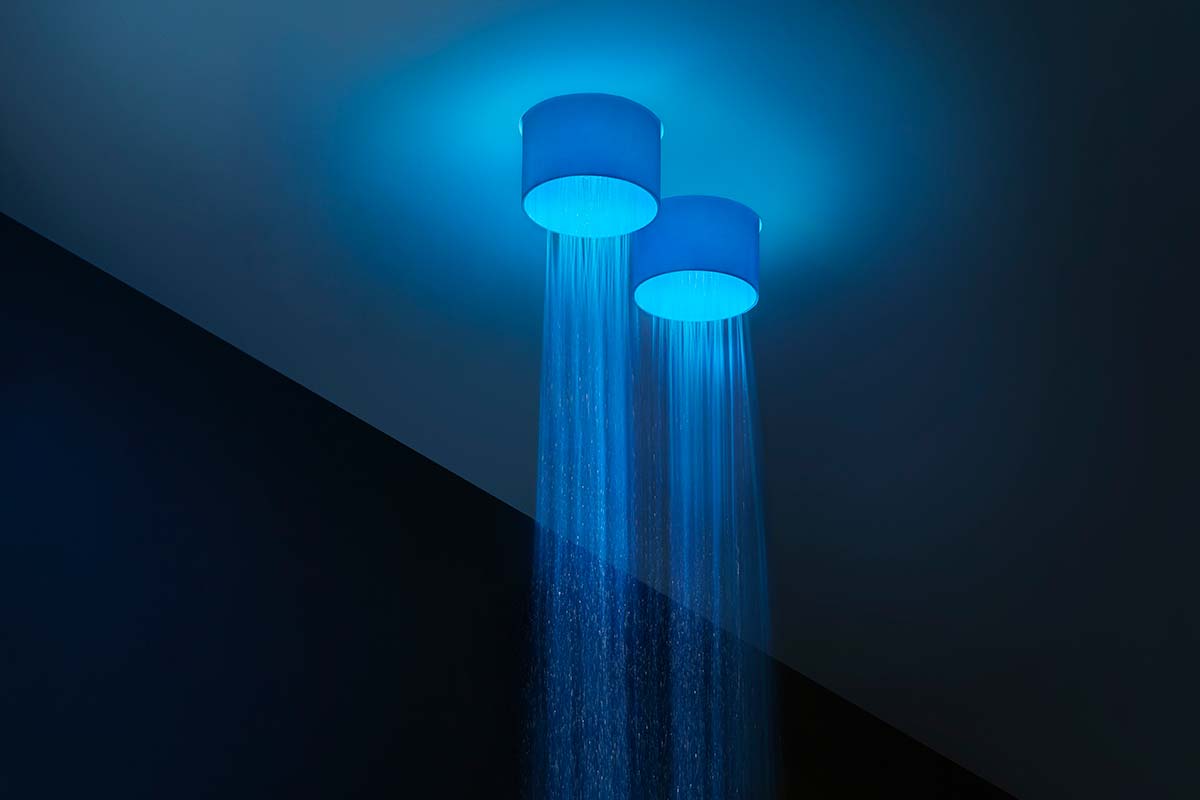 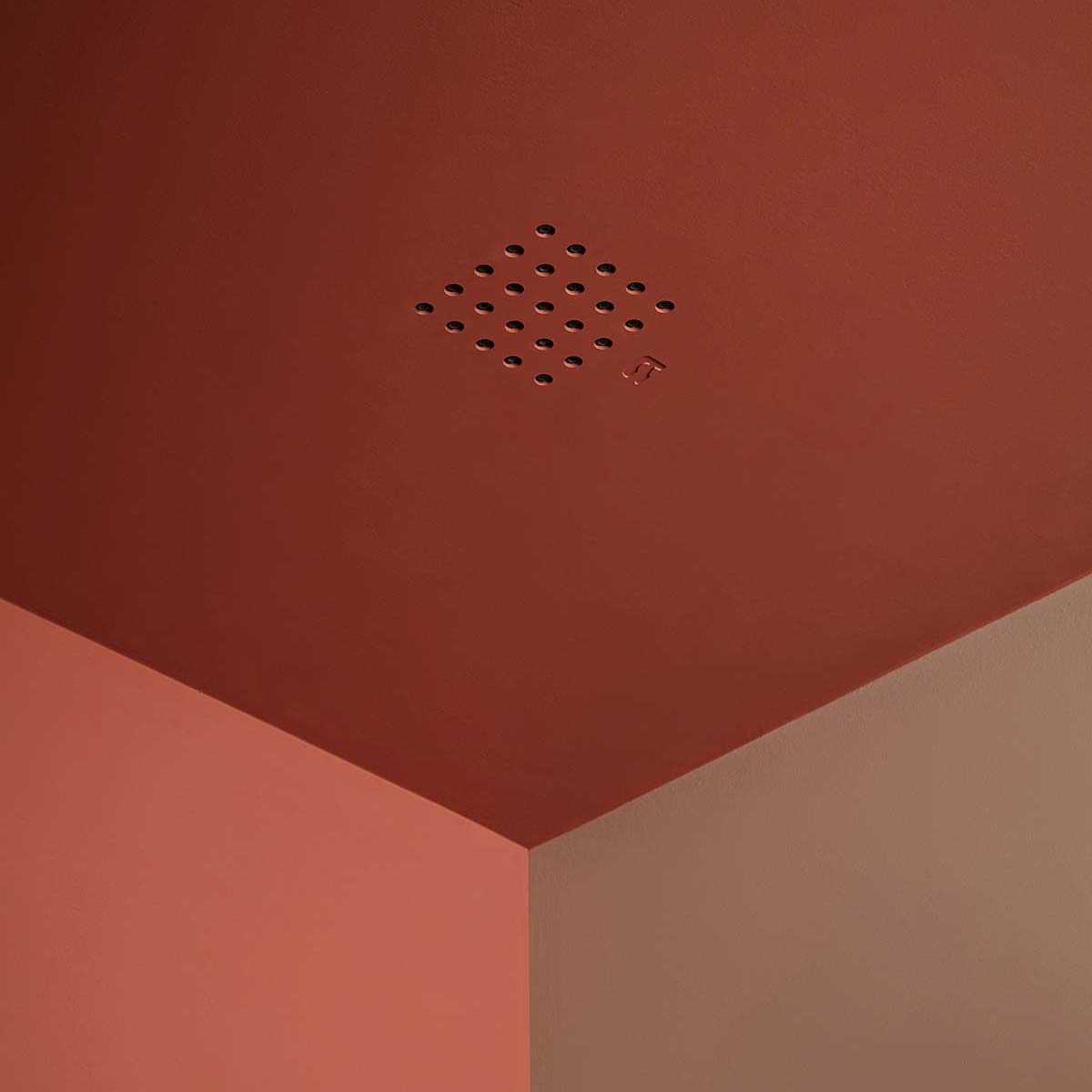 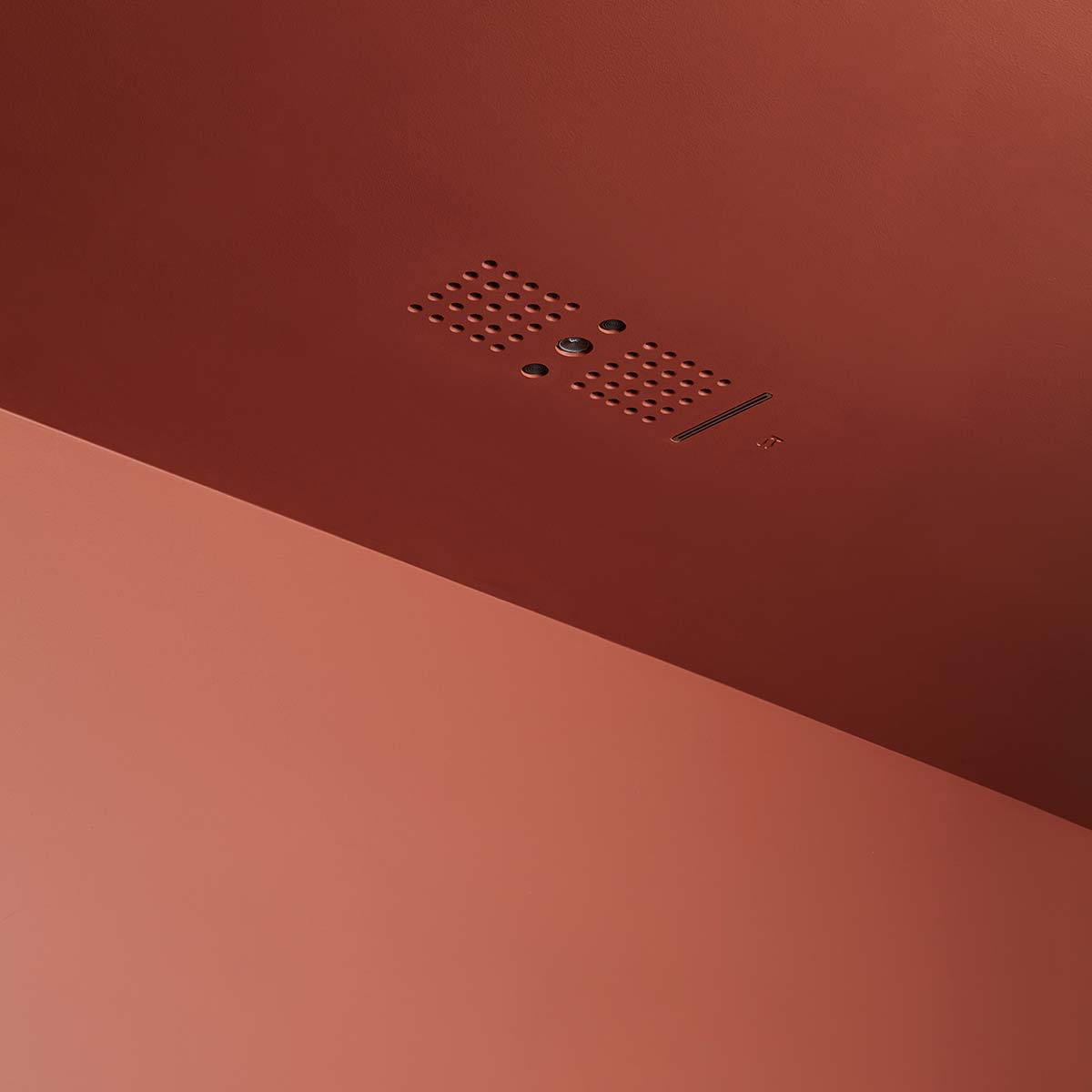 More recently, the theme of the built-in shower head has led to even more radical, minimal and structural results, erasing the distances between the product and its frame: this principle leads to Ghost (and its evolution Ghost Combi), designed by AL Studio as a totally vanishing shower head: Ghost reveals itself only when it is functioning; when off, its presence is perceived only thanks to the holes, containing small but high-performance nozzles.

To add a poetic touch, the design duo Calvi Brambilla has created Raindrop (the latest item in the family of Antoniolupi showers), shifting the focus into a natural context: delicate concentric circles shaped on the ceiling envelop the head, suggesting the effect of rainfall striking the surface of a body of water. 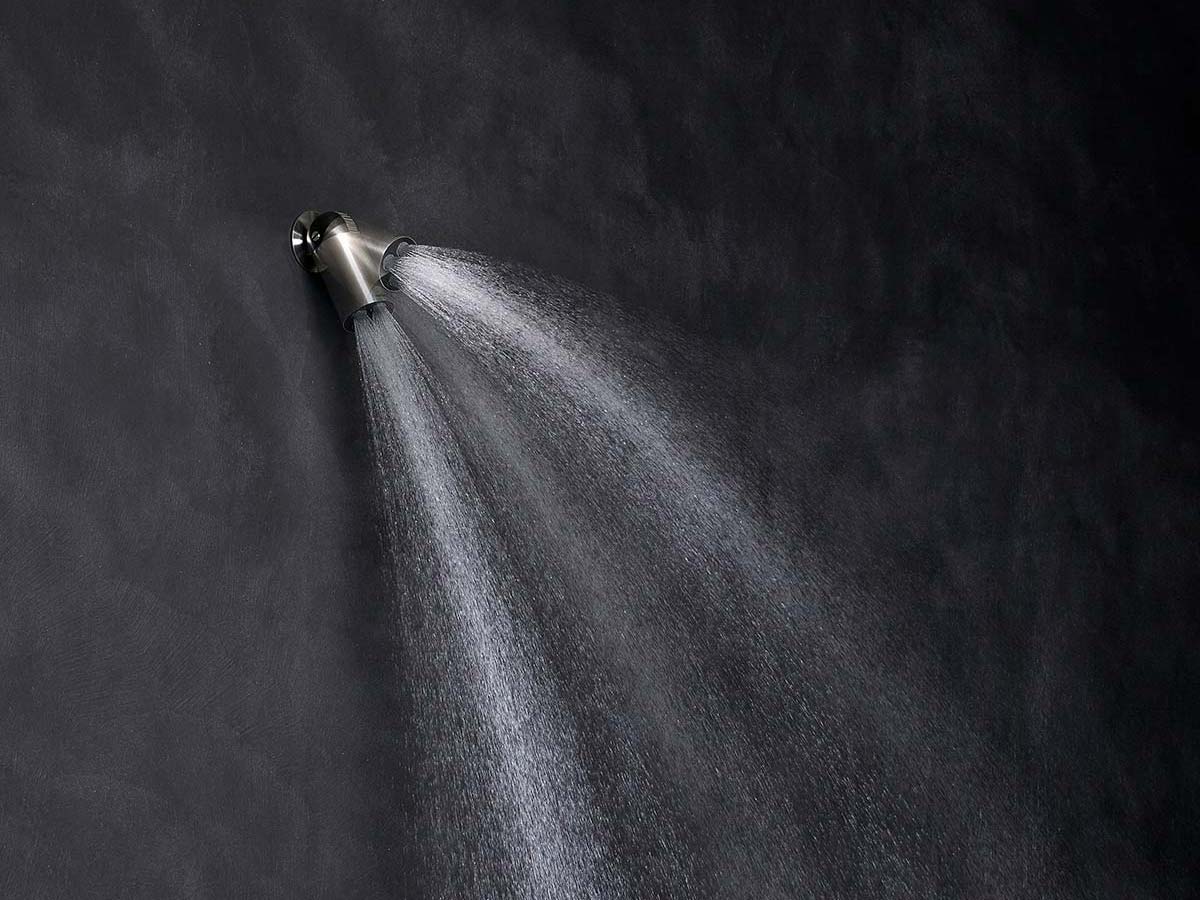 Along this path of growth and evolution, Antoniolupi has formulated an admirably variegated range of built-in shower heads, interrupted only by an equally innovative product, Azimut, a wall- and ceiling-mounted head in stainless steel and black Derlin that differs from its forerunners due to its design (a central joint that permits the head to rotate and aim the spray by more than 180°). But in keeping with the company’s consolidated philosophy, further surprises are definitely in store.

Azimut 68, a yacht for everyone

Pedrali debuts in the States

A flagship for Azimut

Antoniolupi: the state of ideas

The breath of Richard Ginori