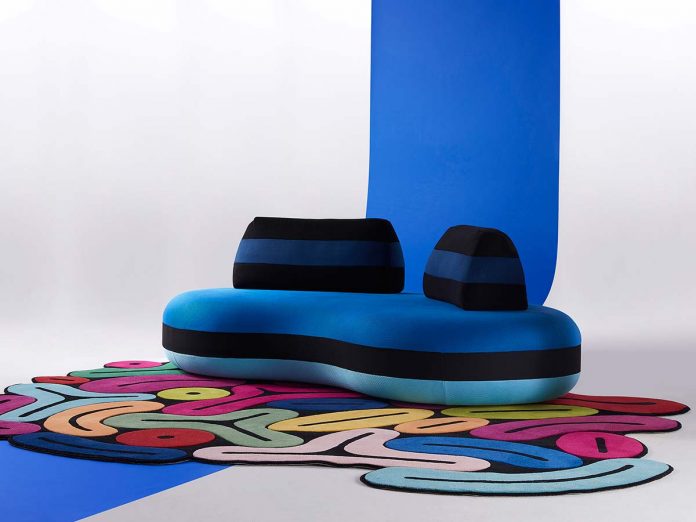 In 2019, entering the Roche Bobois showroom in Lisbon in search of a lamp, Joana Vasconcelos discovered the Mah-Jong sofa designed by Hans Hopfer in 1971, and was captivated. This was a positive prelude to what happened next. A few months later, the company commissioned her to work on six of its creations, leaving her free to reinterpret them. One of the items was the iconic Mah-Jong. This was the start of a dialogue between the artist – noticed during the 51st Venice Biennale in 2005 with A Noiva (The Bride), which brought her international acclaim, and the first woman and youngest artist to show work at Versailles, in 2012 – and the French company with a taste for straying off the beaten path.

“When we asked Joana Vasconcelos to work with Roche Bobois – says Nicolas Roche, artistic director – we above all wanted to give our customers a chance to take part in a dream: a creative, brilliant, enticing collection, an optimistic and unusual version of the French Art de Vivre interpreted by her creative gaze.” The feeling is still strong, and has been sealed for the 60th anniversary of the maison with a collection that has just been presented at Paris Design Week, until 12 September in the French capital.

The challenge was to create a line of upholstered furnishings, carpets and multifunctional accessories that would be fun and appealing, ready to interact with the public, obtained by applying the personal codes of the artist to everyday useful objects, offering a vision of the world applied to the design of residential spaces. The result is Bombom, a series of sofas with fluid, organic and sinuous forms, for configuration and completion thanks to mobile, independent backs.

The color choices reflect the personality of Joana Vasconcelos: forceful, fresh, sharp and profound, always mixed with the intensity of black that unites and brings out contrasts. As in the Isis, Perdição & Sinapse carpets, pure energy in lively lines, forms and colors, constantly moving in the gaze and the spirit, and Bombom Tutti Frutti, tufted in 100% wool, with variations in thickness that are reminders of the work Finisterra (2018).
Finally, the series of cushions goes back to motifs taken from the original drawings of the artist, printed and embroidered on white or black backgrounds. Available in three sizes and six different models.

A new single-brand outlet in Moscow for Poliform

K-Life, the solid surface create for well-being by Porcelanosa Group