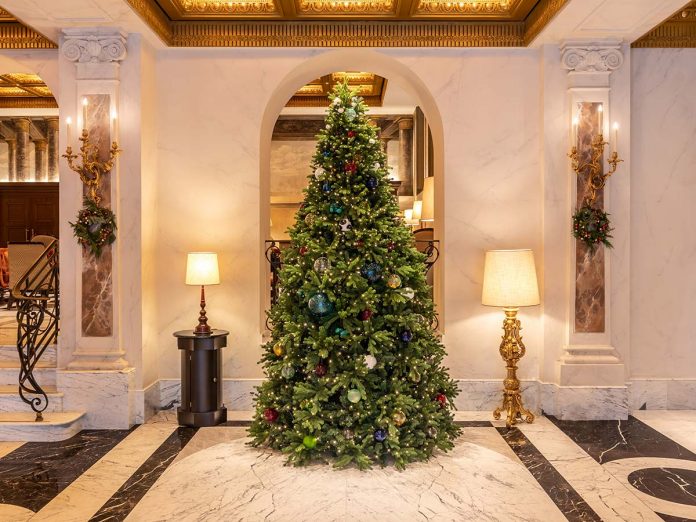 Yesterday, Thursday 28 November, Christmas began at Hotel Eden in Rome. The protagonists of the event were Luca Virgilio, General Manager of Hotel Eden, part of the Dorchester Collection, Silvia Damiani, vice-president of Gruppo Damiani, at the helm of Venini, and a majestic Christmas tree, for which the glassworks has created decorative spheres in blown glass.

The iconic holiday symbol in the hall has a height of 4 meters and is decorated with Venini spheres made entirely by hand with the age-old techniques of Murano glass. Luca Virgilio commented: “For the upcoming holiday season, we are very pleased to have formed this exclusive partnership with Venini, which since 1921 is a synonym for artistic thinking, a language of luxury and great human value. Hotel Eden has made these principles its main focus, making the encounter with Venini and the Damiani family absolutely natural.”

Opened in 1889, Hotel Eden in Rome is a symbol of the city’s lifestyle, thanks to a structure that contains luxurious suites and restaurants, with a fine view of the Eternal City. Venini has also enhanced other spaces, such as the library, the lounge of the hotel, and the white counters for the concierge and the reception, with a selection of the company’s vases.

This may not be the last collaboration between the glassworks and Hotel Eden. Silvia Damiani reveals: “Made in Italy, with its high quality and know-how, is a unique heritage that Venini interprets with its creations, and Hotel Eden translates this excellence in the field of hospitality and cuisine. We are also considering ways to consolidate this synergy, creating a joint collection that can express the finest in Italian authenticity.”

Colors and materials for the new outdoor by Baxter