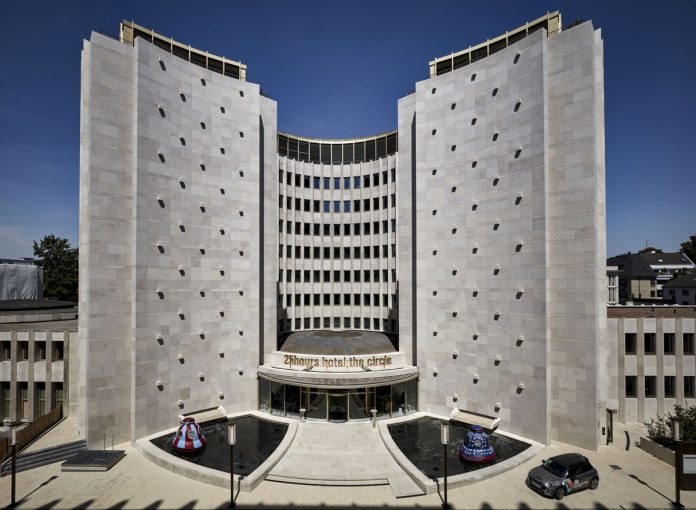 “A fresh hotel idea”. That is how the CEO Christophe Hoffmann defines 25hours Hotel The Circle, a creative alternative to grey ordinariness, born to satisfy the contemporary demands of a cosmopolitan public. To the demand, came a response.

The hotel is located in the building which is an historical monument in the heart of Cologne, formerly the administrative headquarters of Gerling insurance, with its architecture completely redesigned by O&O Baukunst and with interior design by Studio Aisslinger. The creative team has developed a particular concept of holistic design, allowing itself to be inspired by a retro-futurist style. An oxymoron, upon the first impact, but one that definitely hits the mark (and is widely appreciated) with the final faceted effect that integrates two worlds that are apparently in antithesis with an unparalleled aesthetic fluidity.

The ingredients? First of all, a style that alludes to the era of the building – the post-war economic miracle – then furnishing elements and accessories designed by Aisslinger himself, special editions created specifically for the hotel in collaboration with Moroso, Thonet and Cappellini, and the extraordinary work on the lighting created together with Wästberg and B.Lux.

The historic circular foyer of the insurance company is the spectacular entrance of 25hours Hotel The Circle, but also its lobby, which is why the designer has expanded and extended the central reception desk, which is made of walnut with a sunny yellow top. Also in the reception area, the original white marble of the floors has been preserved in its whiteness, while the Nero Marquino of the niches, where the policies were once paid, is now experiencing a new life, creating the spaces for a well-stocked and refined bookstore, thanks to the collaboration with the Taschen publishing house, and for a rental bike corner set up thanks to the Berlin bicycle manufacturer Schindelhauer.

Also within the NENI Deli restaurant, on the same floor, Studio Aisslinger thinks outside the box and has created a series of Meeting Huts, alcoves of different sizes that lend themselves perfectly to temporary work stations or frugal lunches, not far from the canonical dinner tables. Surprisingly, even the 207 rooms of various categories, have ‘spicy’ and unexpected details, like the bathroom positioned right behind the bed offering a breathtaking view of the city from the… shower.

A night in the cooler