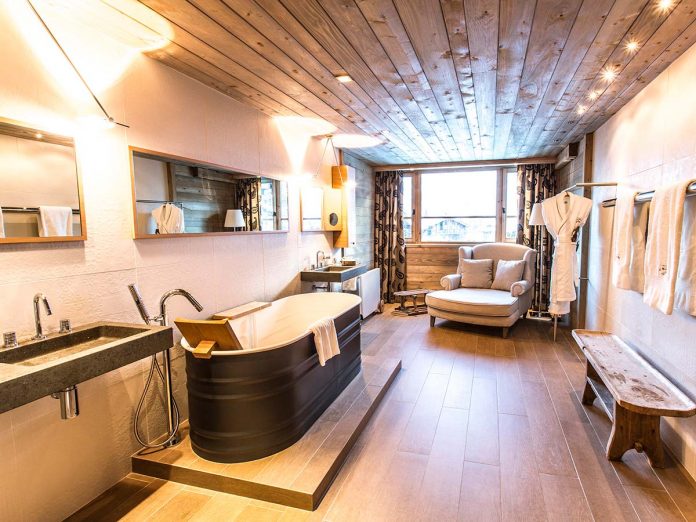 Increasingly present in the large-scale contract sector, Tubes works with boutique hotels and medium-sized structures, as well as residential complexes. Cristiano Crosetta, CEO, explains the reason for this trend. “One of the main factors is its tailored aspect. Our radiators are, in various respects, custom-made, or rather created according to the requirements of the design.

Therefore, they can vary in terms of size and finish and can even play with different kinds of compositions in order to make the heating unit increasingly personalised. We can also produce ad hoc models, making changes to the initial design and finding technical solutions that respond to the concept provided to us by the architect.”

The interiors of the Le Blizzard and La Mourra five-star hotels, located in the French ski-resort town of Val d’Isere, were designed by Beatrice Cerboneschi. These two independent structures, whose alpine-chic architectural style recalls the traditional mountain chalets in wood and stone, have been part of the same property since 1963.

Le Blizzard has seventy rooms with mountain views, a spa, a lounge-bar, and two restaurants, while La Mourra is made up of a hotel with spa, a Japanese fusion restaurant, a lounge-bar, and four private chalets. With the design of its Elements collection, Tubes became a protagonist of both hotels’ bedrooms, and of Le Blizzard’s spa as well.

“These two structures are characterised by the presence of various environments, from the rooms, to the chalets, to the spas, to the suites. Thanks to our wide range of products, we were able to respond to the need for differentiation.

Add-on (designed by Satyendra Pakhalé) was used within the walls of the spa, creating a sort of window between environments. The free-standing version of Milano (designed by Antonia Astori and Nicola De Ponti) was used in the relaxation room, heating the space and contributing to its peaceful atmosphere. The t.b.t. (designed by Ludovica+Roberto Palomba) were positioned near the bathtubs in the suites and the Montecarlo (designed by Peter Jamieson) in the rooms’ bathrooms.

Thanks to our ability to create custom-made products, we have been able to provide tailored components,” continues Crosetta who also explains how the radiators improve the level of hospitality because they are silent and lend a familiar feel to a room, making guests feel at home.

Purity of form for Iko by Flou