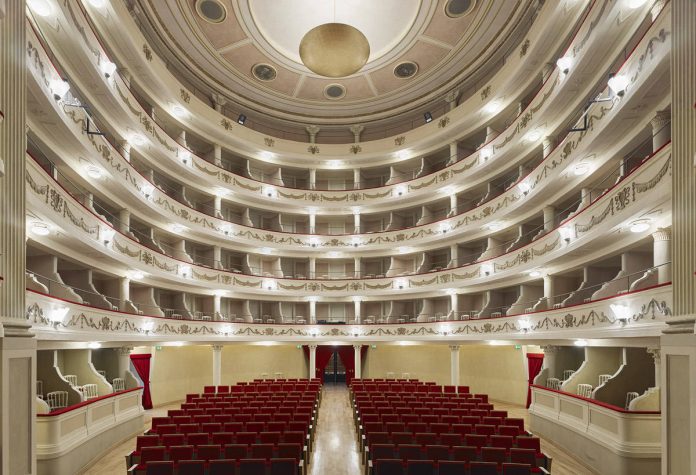 After 40 years of inactivity, the Camogli Social Theatrehas returned to the limelight, thanks to this skilled redevelopment project.
The theatre was strongly desired by the city’s ship owners. It was designed by Salvatore Bruno and constructed between 1874 and 1876. Today it still conserves its original horse shoe architecture, with four tiers of boxes, gallery and ceiling-high stuccoes.

This project, by the studios Berlucchi, Brescia and Arassociati, Milan, also involved Catellani&Smith which developed the entire lighting and illumination plan, featuring pieces of extraordinary scenographic impact.
One of these, the Disco Dorato – concealing a Light Contract soul – has been fitted above the parterre, perfectly integrated within the setting.
At the entrance, visitors are accompanied to the hall, with lighting emitted by the sculptural pendant lamps Macchine della Luce. Thanks to the composite structure of disks covered in golden colour leaf, Macchina della Luce creates plays on light and shadows on decorated ceilings, conferring warmth upon the white and black marble cladding which distinguishes the interior.