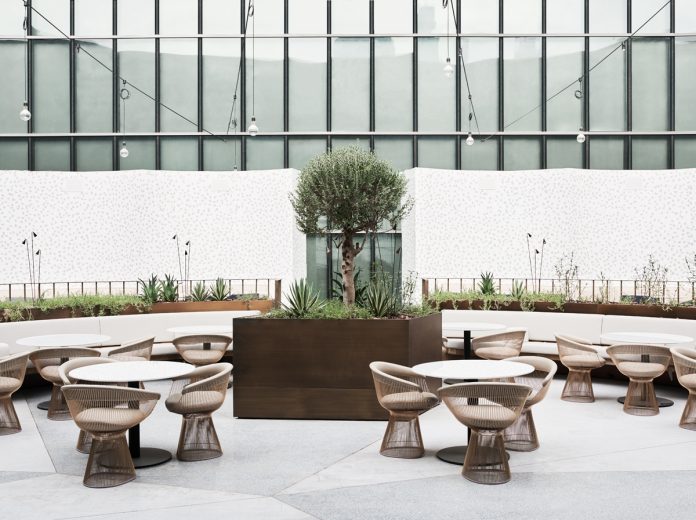 The feeling is that of floating in fresh, calm water, surrounded by the light blue of the ocean’s foam and by splashes of colourful coral and lichen. The design of Sean Connolly’s restaurant at the Dubai Opera is a journey under the sea, which the Alexander &Co. design studio and the TRIBE architectural firm conceived of together, exploring its most fascinating aspects (dimension, texture, and nuance) and interpreting them according to a common philosophy that seeks to reduce redundancy and that welcomes a challenge. In fact, atop the most iconic building of the United Arab Emirates – the Dubai Opera House – elegance and delicacy reign, expressed with vivid creativity. It is from here that the restaurant, with its 350 seats and external bar with sky garden, looks out at the city from above.

“We were inspired by the irregular shape of the building, enfolded in a sinuous, glass surface,” explains the team of Alexander &Co, “even though it was complicated to carve out a 2000 square meter space. With TRIBE we decided to use common materials to create an uncommon result.” Given the large scale of the space, the restaurant is subdivided into different areas according to specific uses: brasserie, private dining room, chef’s area, and various bars, all of which vary in their use of materials and finishes, adding to the overall visual impact. Inside, every element explores the marine world: the pearly shades and sultry texture of oysters, the colour tones of coral and of every other form of underwater life. Beneath one’s feet, the wool rug, specifically designed by Alexander & Co., evokes the expansive ocean with iridescent shades of blue, while, above, a part of the ceiling is clad in a series of alternating glossy and matte tiles which recall waves rippling across a watery surface.

An ‘oceanic vision’ strengthened by several works of art, like the one that hangs from the ceiling down to the floor, created by Jacqui Fink in hand-knit merino wool, and resembles the tentacles of strange creatures from the deep; or those of artist Tracey Deep, known for her installations, created from found objects that celebrate the flora of her native Australia.

Most of the spaces develop around a central area, the Pearl Bar, characterised by the use of grey leather, walnut wood, and yellow marble. Then there is the grey marble of the tables and the red leather of some of the sofas and chairs which evoke the contrasting colours of marine plants and animals, while the coarsely finished bar surface calls to mind the rough texture of shells. The modern and original interior design, in which varying tones of green, grey, blue, and white combine, is completed by a custom-made lighting system in white lacquered steel with brass finishes inspired by the ‘tentacular’ lamps of Serge Mouille, an iconic design of the 20th century.

The Permanent Collection of Italian Design can be admired at the...

Lapalma. Flexibility at the service of contract