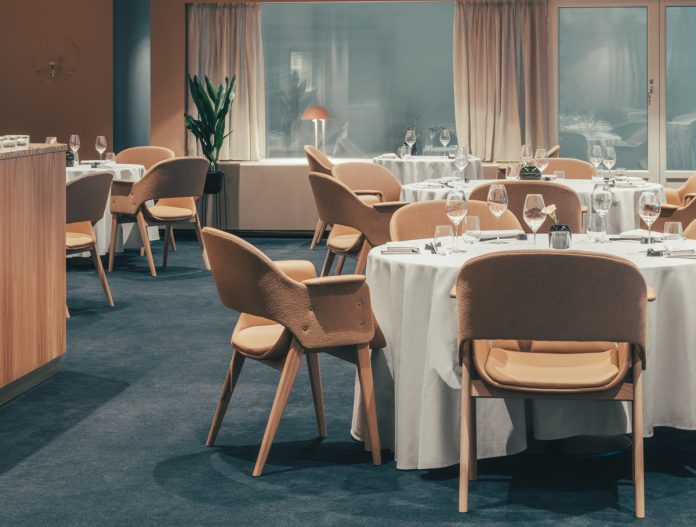 “Having lived most of my life in Helsinki, it was rather moving to be able to work on the Palace restaurant. We were given the chance to renovate the interiors of a venue I have known since I was a child. I remember my grandfather talking to me about the Palace and its grandeur,” says My Degerth, interior designer at the Note Design Studio founded in Stockholm in 2008.

Note Design Studio is not the only firm to have contributed to this project, which also boasts the collaboration of Helsinki’s SARC Architects, the Stockholm-based construction company Skanska, and Helsinki’s Agency Leroy. The latter, situated just a stone’s throw away from the Palace restaurant, designed the restaurant’s new logo and menus, drawing inspiration from old period photographs. The Client also provided its own input, discussing every detail from the choice of colours to the tailor-made food trolleys, while the Chefs were called upon to review the acoustics and the table layout.

The result is a “futuristic” restaurant with a clear link to the past, and in particular to the modernist design conceived in 1952 by the Finnish architects Viljo Revell and Keijo Petäjä. Their project, reminiscent of a large ocean-faring ship, drew inspiration from the masterpieces of Le Corbusier. The Client did not want the first Finnish restaurant to receive a Michelin star in 1987 to become just another trendy venue. And indeed, visitors crossing the Palace’s threshold, with its view overlooking the harbour of Eteläranta, are catapulted into an elegant and refined 1950s ambience, in which the colour scheme plays with the contrast between the teak coated walls and elevator, the soft bluey-green carpets (a colour that is echoed on the dining room pillars) and the white of the pristine tablecloths on cosy round tables.

The tailor-made food trolleys are another sophisticated reminder of the 1950s, with their geometrical lines and full round wheels, similar to those of Alvar Aalto’s 901 tea trolley.