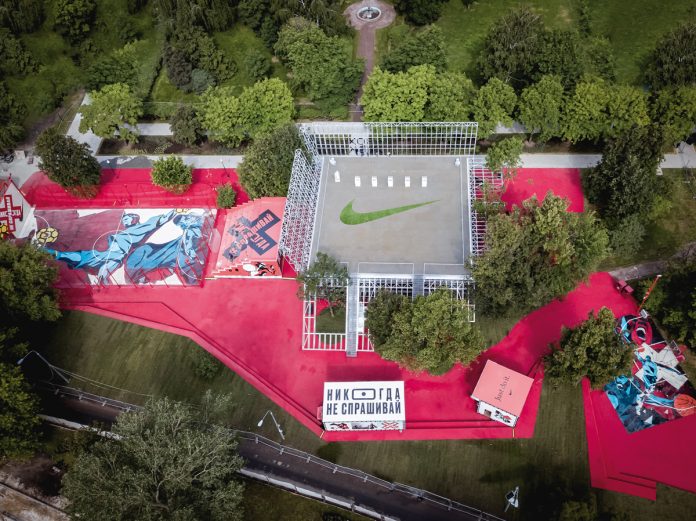 Spectacular. That’s the first word that pops into your mind when you look at – or rather, admire – the new Nike Box MSK sports and cultural hub in Gorky Park. Designed by Kosmos Architects in collaboration with Strelka, the complex includes open-air football pitches, three-on-three basketball courts, yoga areas and spaces for indoor and outdoor training. It will also serve as the base for Moscow Running Club. Art and culture will play a big role at the centre too, thanks to special events and partnerships.

“Nike is excited to create a new facility in what is a world-famous park,” said Nike EMEA VP Creative Director Andy Walker. “Partnerships will local talent and a focus on sport have meant that this has become a really important project with a unique body with the city.”
Nike Box MSK was designed according to five principles: transparency, openness, functionality, integration with the surrounding environment and love for sport. The facility spans 4700 square metres and the organisers have already planned 7300 hours of activities for the next 12 months. It will be open all year round, with access free of charge.

The centre is meant to evoke the appearance of an open shoebox, in Nike’s signature style. Yet the project also draws inspiration from the local context, in an illustration of the strong bond between the US company and Moscow. The area around the new facility is one of rugged neighbourhoods, industrial architecture and traditional korobkas (meaning “box” in Russian). These enclosed pitches are typical of the urban make-up of Moscow’s suburbs.
The 3D metal grid that covers the facility serves as a membrane between the internal space and the park, allowing air, light and people to pass through freely.

In recent years, Moscow has witnessed extraordinary development in terms of green spaces, with Gorky Park one of the main catalysts for architectural innovation. Originally been designed to house exhibitions of industrial achievements, it now features the Garage Museum of contemporary art, designed by Shigeru Ban.
Credit must go to Nike for the fact that no trees were felled in order to create Nike Box MSK, while the centre will also be used as a recycling point for plastic bottles.

The global footprint of Calligaris sends out a positive signal

Happy birthday to the Kartell Componibili!

Organization is an art