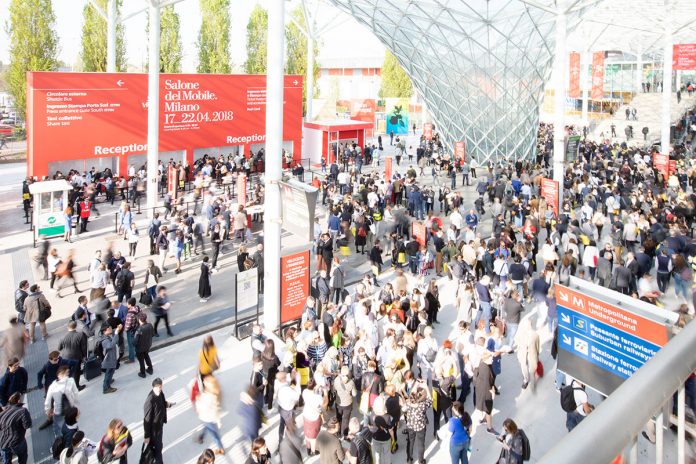 There was great satisfaction for organisers and participants alike as the latest edition of Salone del Mobile.Milano drew to a close. Between 17 and 22 April, the event took over the pavilions of the Fiera exhibitions centre and several parts of the city, turning Milan into the epicentre of the international design universe.
The event once again showcased its pull and power of engagement, registering 434,509 visitors from 188 countries over the six days. Those figures represent a 17% increase on 2016, which also saw the same two-yearly kitchens and bathrooms events, and a 26% increase on the 2017 event. There were 1,841 exhibitors in total, 33% of which came from 33 different countries, in addition to 650 designers under the age of 35 taking part in SaloneSatellite.

“It’s been a unique event which has shown how business and culture can provide a shining example of an Italy that really works and where industry and institutions work in sync towards a shared goal,” said Salone del Mobile.Milano president Claudio Luti. Luti’s sentiments were echoed by FederlegnoArredo and Federlegno Arredo Eventi president Emanuele Orsini: “The fact that so many political figures have come together over the past few days represents a show of support for a sector that is vital to the development of the country. It has underlined the need to come up with consistent, effective industrial policies – this is vital necessity for a sector of the Italian manufacturing industry that accounts for 5% of GDP alone.”

This year’s Salone del Mobile.Milano Award was shared by CC-Tapis, Magis and Sanwa, while the panel awarded a special prize to Maurizio Riva of Riva 1920.
It has already been confirmed that next year’s edition will run from 9 to 14 April 2019.

At the FuoriSalone arrives the Audi Mind Movers

On the stage of creativity