A visit to the Poltrona Frau production site in Tolentino is both a journey through the past and into the future, grounded in tradition, tirelessly focused on the horizon of innovation. The company’s identity is determined by this apparently contradictory dichotomy from which it has forged solid foundations, mustering remarkable strength and inspiration for growth and development. The Tolentino factory is tangible proof of this: the modernity of its architecture (on a site of over 100 thousand sqm) is a trove of artisan knowledge and culture grounded in the territory’s historicity and traditions. State-of-the-art production technology is blended with the meticulous and irreplaceable manual skills of human resources which have been trained here. Territoriality goes hand in hand with internationalisation, another apparent contradiction which defines Poltrona Frau, so inextricably linked to its typically Italian expertise, specifically to the Marche region, and yet open to markets all over the world, present in a hundred countries with 13 flagship stores and more than 500 stores across five continents.

Therefore, entering the Poltrona Frau production site means getting a taste of the brand’s heart and soul, where leather is processed to ‘dress’ products which exude unequivocal charisma.
Leather has been the company’s distinctive trait since it was first opened in 1912 by Renzo Frau. This material was the reason for which the company moved from Turin to Tolentino during the 1960s, upon the wish of Franco Moschini (currently the Honorary President, who at the time had just taken over the company’s reins), with the aim of positioning itself within the territory of the Marche region, renowned for its tanneries and leather processing works, which would supply raw materials to the brand. 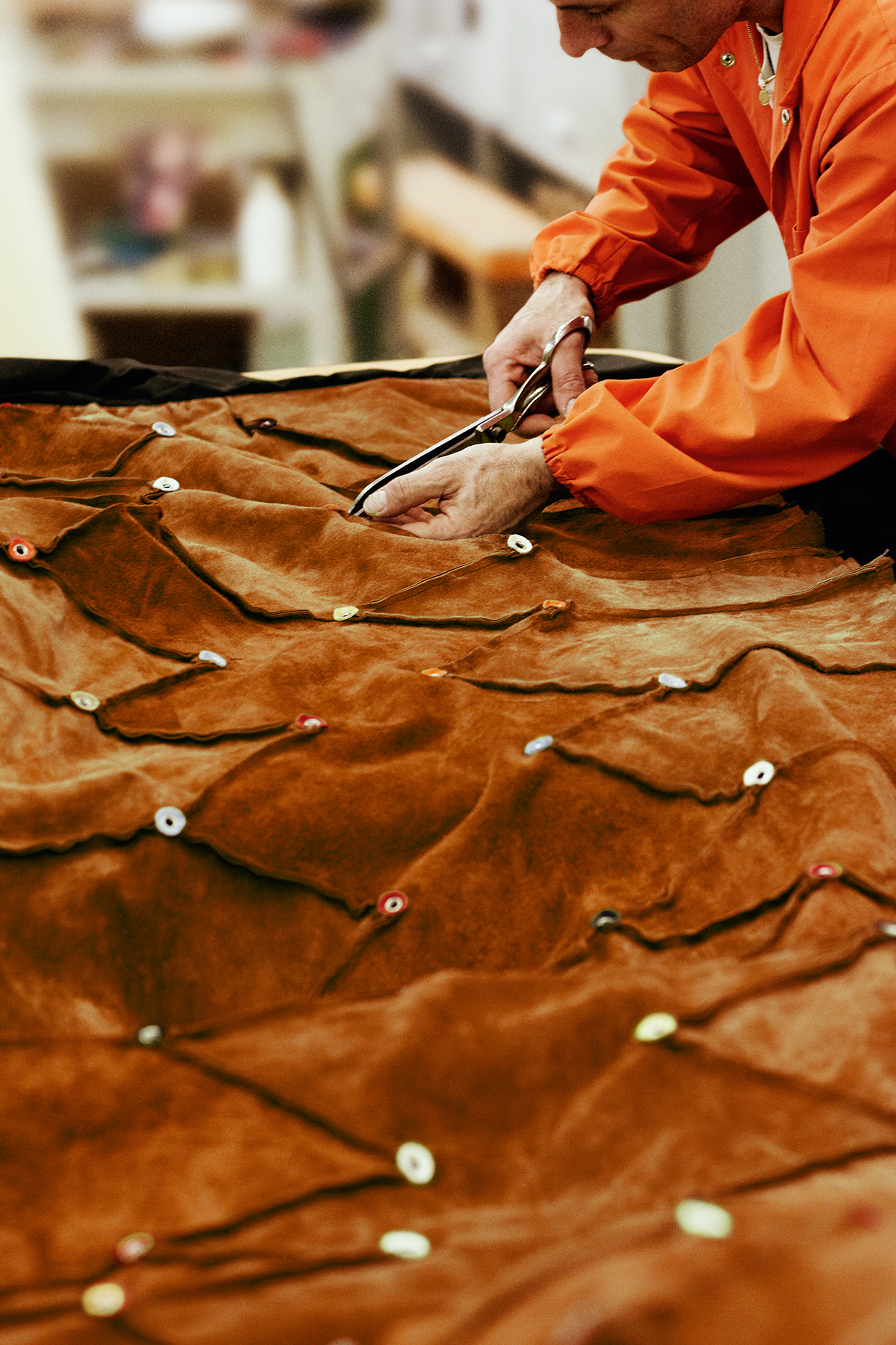 Today the company counts 9 leather collections in a total of 177 nuance (Pelle Frau® Color System, Nest, Soul, Heritage, Saddle, Century, Cavallino, Safari and Cuoietto) which undergo 21 tannery phases as well as a sequence of tests carried out at Poltrona Frau workshops. Such variety and specificity inevitably inspired the coining of Leathership®, a term which denotes the company’s leading position on the industrial scene. 340,000 sqm of leather processed, 22,000 kilos of horsehair, 1,100,000 of beech wood for interior structure, every single year. 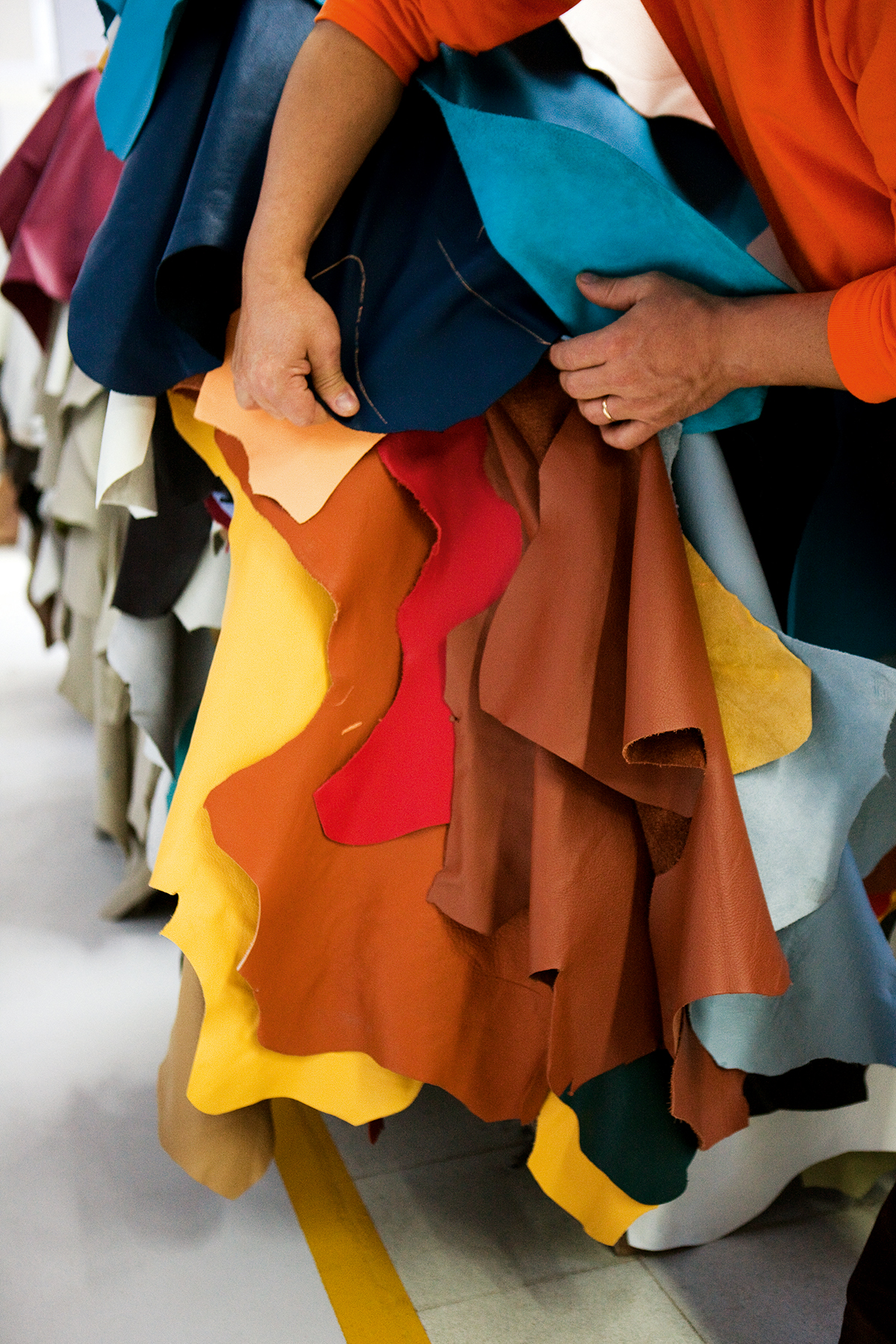 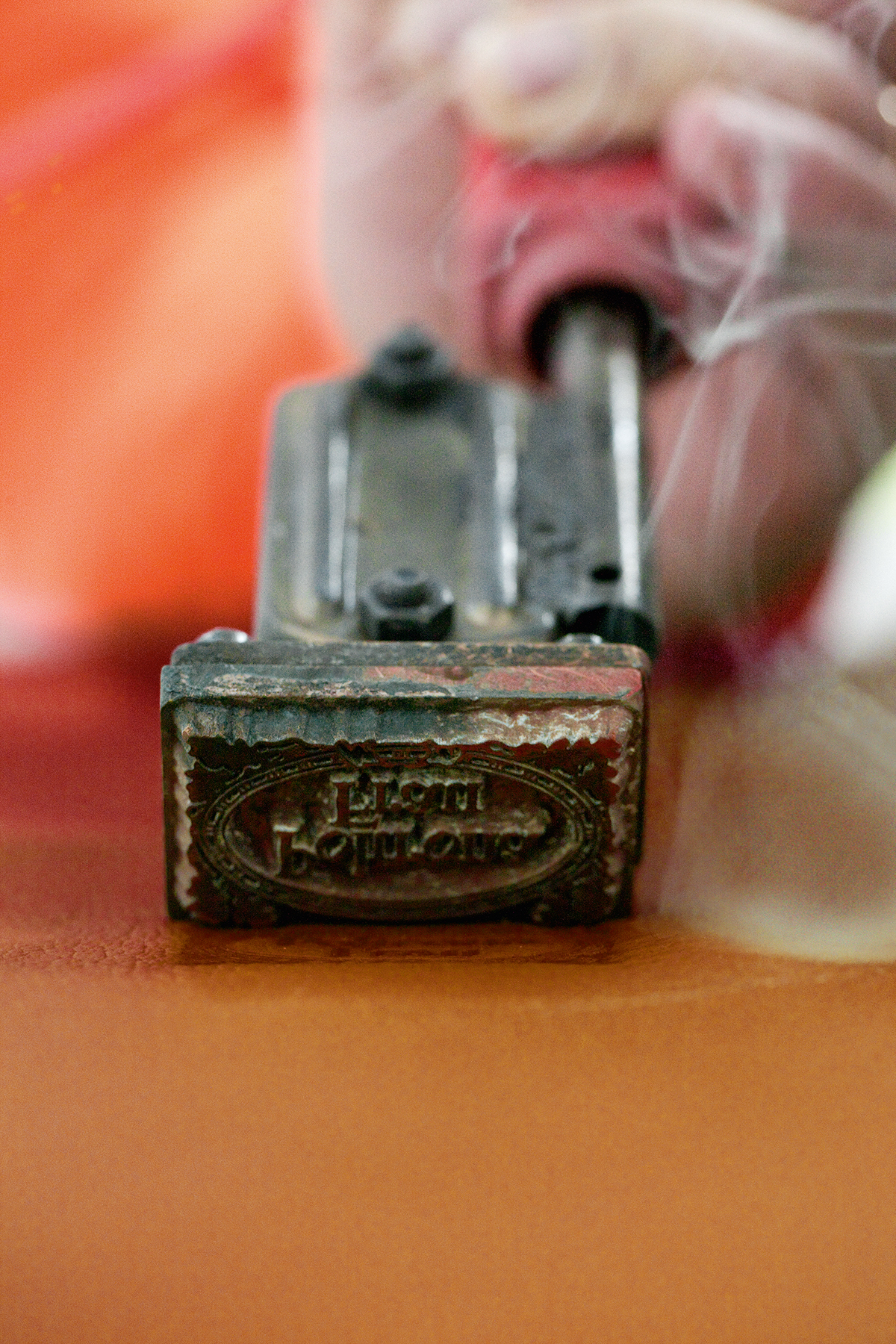 This cult of leather has been developed on a number of fronts, including by the Residential Department, enriched by the contribution of internationally acclaimed designers and completed by the Icons Collection, as well as the Contract Department, which continues to supply and develop bespoke projects for theatres, concert halls, auditoriums, museums, embassies, 5 star hotels, showrooms and lounges all over the world. Some of its most prestigious projects include the European Parliament in Strasbourg by AS Architecture Studio, the Walt Disney Concert Hall a Los Angeles by Frank O. Gehry, the Jockey Club Innovation Tower auditorium in Hong Kong by Zaha Hadid and the Macro Museum in Rome by Odile Decq.
Lastly, the Interiors in Motion Department, founded in 1984, which specifically conceives solutions for yacht, train, helicopter and air craft interiors (in collaboration with brands including Pershing, Italo, Alitalia, Ethiad Airways and Singapore Airlines) as well as for the automotive sector, indeed Frau® leathers are used to upholster and clad interiors by Ferrari, Maserati, Alfa Romeo, Land Rover, Lancia and Audi. Porsche, Volskwagen and Infiniti. 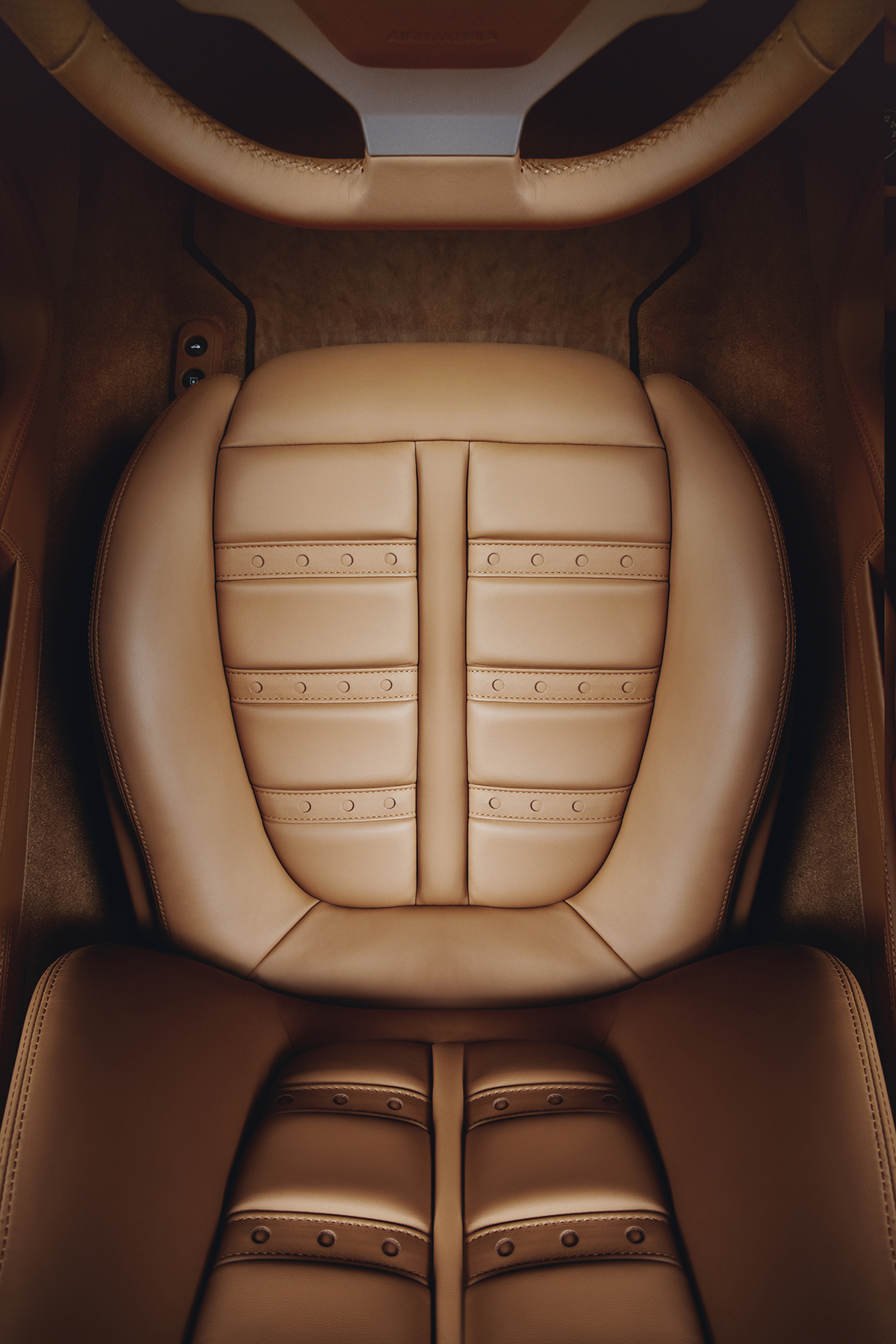 The company first came into contact with the automotive world back in 1984, specifically for the creation of an office chair collection, Antropovarius designed by none other than Ferdinand Alexander Porsche, who drew inspiration from his own vehicle manufacturing company for lines and materials.
Even before this, the company had already sown the seed for its most innovative departments: the first contract for hotels and ships date back to 1923 and in 1930 Poltrona Frau furnished the first class of Transatlantico Rex, the pride and joy of the Italian Marines. 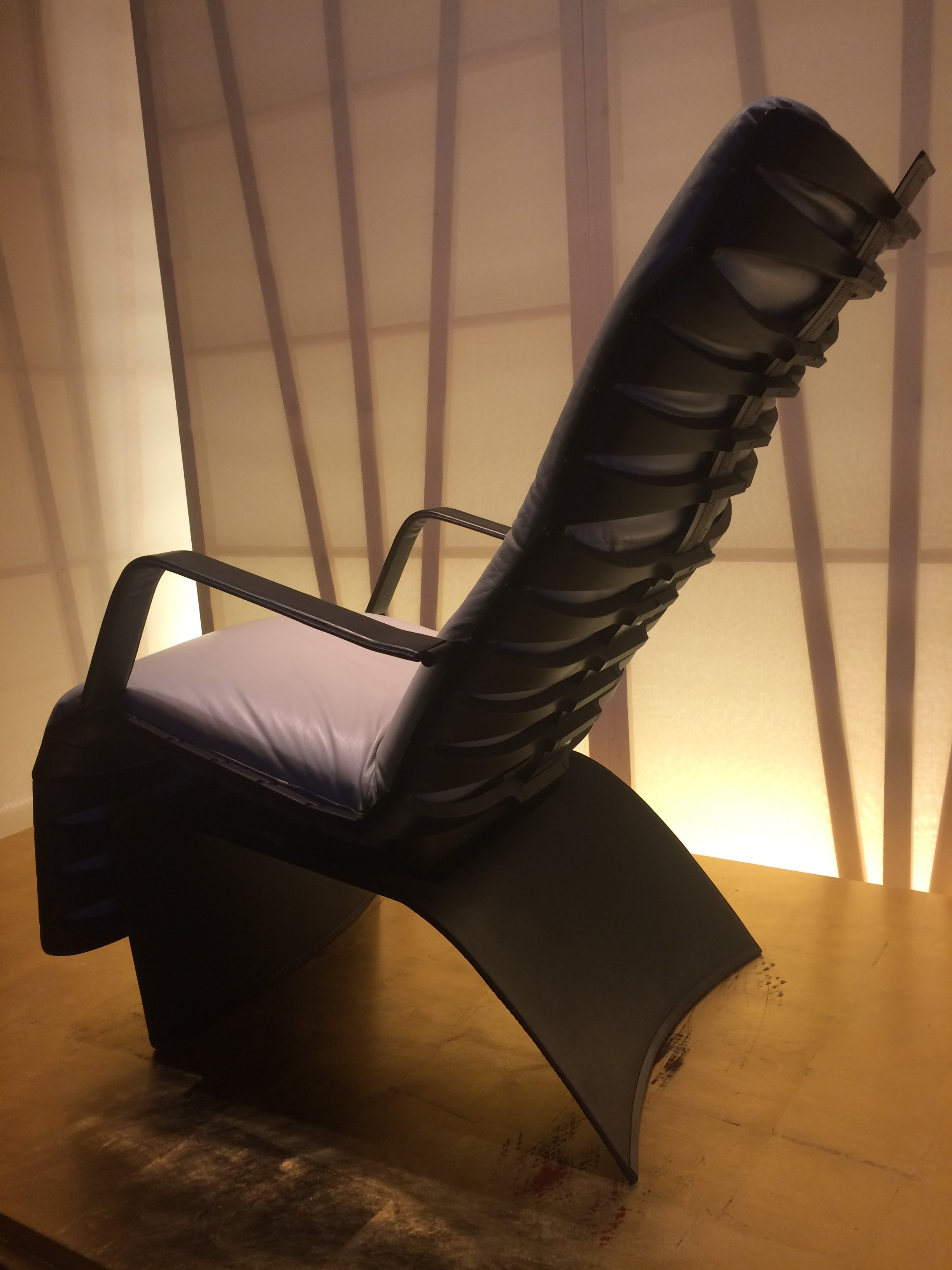 Therefore, the company’s propensity for innovation and dynamic project development emerges from it’s history, brimming with collaborations, creations, opening out onto worlds which had remained unexplored. Not least communication, when during the 1920s the company engaged illustrators the calibre of Golia and Nanni for its advertising campaigns, and thanks to its production flexibility, focused on the keystone of experimentation.

The historic Vanity Fair, created from a sketch by Renzo Frau, the leather and velvet armchair Tabarin conceived for public places, the round bed Lullaby designed by Luigi Massoni, the armchair Sanluca designed by Fratelli Castiglioni, are all landmark products of the company, but also of design history. Other significant products include Dezza by Gio Ponti which won the Technhotel prize in Genoa in 1965, the armchair Interlude by Marco Zanuso, the table Titano designed by Pierluigi Cerri, which earned Poltrona Frau its first ever Compasso d’Oro in 1999, the armchair Archibald by Jean-Marie Massaud, inspired by the iconic Tods moccasins.

The project by Michele De Lucchi for the Poltrona Frau Museum is a delicate and emotional immersion in the history of Poltrona Frau. The Museum was opened in 2012 and is located next door to the production site. 14000 sqm brimming with documents, photographs, prototypes, historic products and materials. Vanity Fair stands at the entrance, in a glass frame and wrapped in white leather.

Indel B proposals for HD Expo