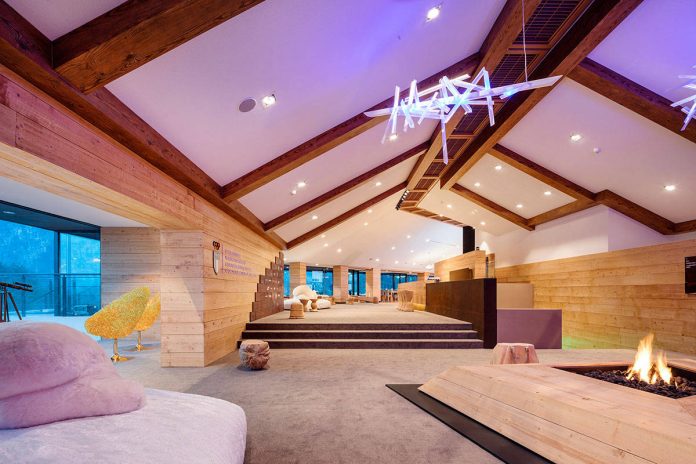 Prospectum is the official hospitality house of the Italian National Olympic Committee (CONI) in Pyeongchang, as well as a veritable hub for all professionals and collaborators involved in the Olympic experience.
With concept by Beatrice Bertini and interior design project by Claudia Pignatale from Secondome, Casa Italia is a modern chalet nestled in the YongPyong Golf Club, Alpensia Resort, characterised by glass walls which create a continuum with surrounding nature: the result of a project which aims to promote Italian excellence, also in the field of art and design.

Among Italian suppliers of excellence we have Riva 1920, with its numerous elements in aromatic solid cedar: sculptural stools by designers including Alessandro Mendini, Mario Bellini, Mario Botta, Vito Nesta, Gianni Veneziano, Luciana Di Virgilio and Michele de Lucchi, along with iconic benches such as Molletta by Baldessari e Baldessari, and the Curve Bench, designed by Brodie Neil.
Bross is another supplier of excellence, with numerous chairs and tables designed by Giulio Iacchetti for the dining and meeting areas. The tables Ademar and Amalong have been matched with Gisa chairs, for a tidy and elegantly warm effect.
Edra is present with a selection of keynote products from its collection, including Margherita armchairs by Jacopo Foggini and the sofa Pack by Francesco Binfarè in the Prospectum Square, or the sofas Gran Khan and Sfatto, along with Grinza armchairs by Fernando and Humberto Campana in the lounge…
Then there’s Ethimo, which has furnished both large outdoor terraces with its Allaperto Mountain collections, designed by Matteo Thun and Antonio Rodriguez, and Costes.
Casa Italia is also home to side tables from a few collections by Glas Italia, as well as various installations by Slamp, such as the Hanami constellation by Adriano Rachele which hangs in the restaurant.

The Dutch Touch in an international context