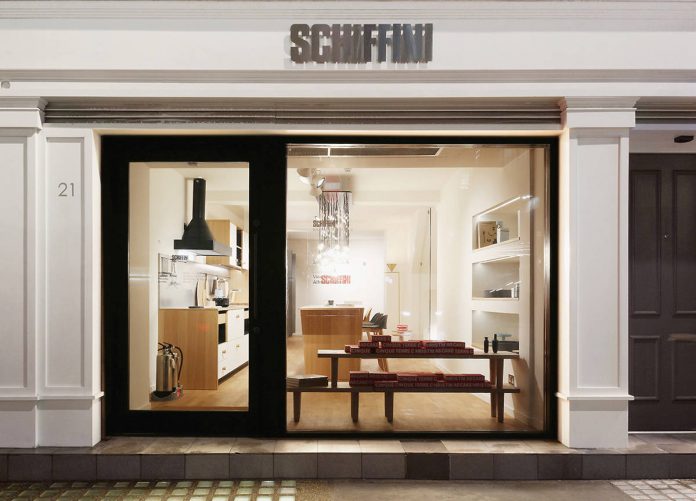 A new, unmissable destination for all design enthusiasts has opened in vibrant London Schiffini, the company specialised in kitchens based in Ceparana, in the La Spezia province, has inaugurated a new flagship store at 21 Duke Street, a short distance away from central Oxford Street, a major shopping destination for fashion and design victims from all over the world.

The exhibition space develops on two floors and hosts prime products by the brand, such as the new Lepic, designed by Jasper Morrison, the result of the designer’s collaboration with Schiffini which began in 2016. The composition bears Morrison’s unmistakable style: minimal, an essential and functional design, “super normal” but original and versatile at the same time, thanks to numerous colour and material matchings, bringing to life infinite solutions.
In addition to Lepic, the historic kitchen Cinqueterre can also be admired, by the company’s symbolic designer, Vico Magistretti. A project launched in 2000, the first kitchen made entirely in aluminium, a model which has remained state-of-the-art and continues to shun trends.
Then there is Mesa, designed by Alfredo Häberli, a kitchen envisioned as a laboratory, an interior for living, the beating heart of the home, featuring a multi-functional isle at its centre which inspires conviviality and encourages us to spend time together while cooking.

The new London showroom is an important showcase for the company and responds to a well-defined strategic choice, as described by Enrico Schiffini, the brand’s president: “The opening of the new London flagship store, in the heart of the city, is part of a vaster marketing plan involving the company’s direct management on particularly strategic markets in virtue of their potential for influencing brand awareness and development at a world level. Without a doubt London is one of these important markets and has developed into the capital of contemporary design, distinguishing itself in virtue of the number and quality of architecture and interior design firms which operate on an international level”.

Around the world of MisuraEmme