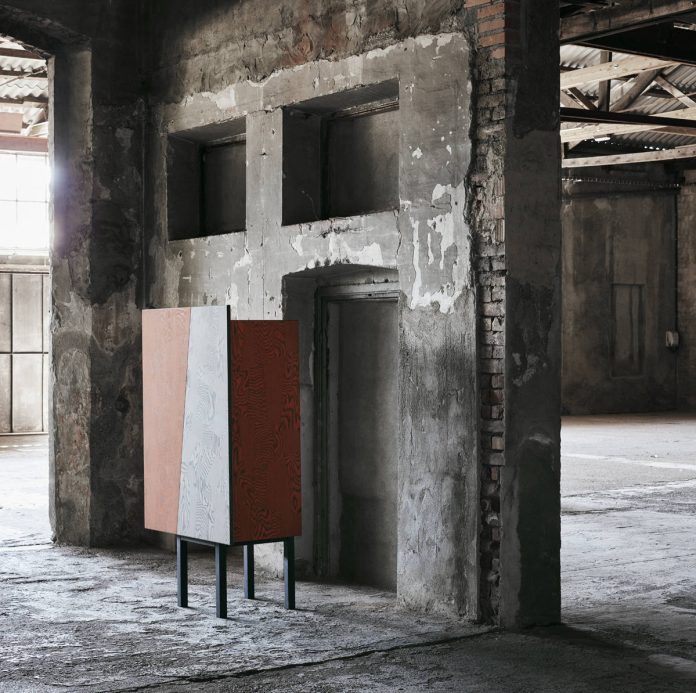 Hector Sottsass and Martino Gamper. Two different personalities, two distant generations now joined by a common denominator. Alpi.
Meeting point is the Re – Connection exhibiting staged in the showroom of Via Solferino 7 in Milan, which addresses the different design approaches of the two designers to the Alpi material: on the one hand the unique wooden pattern created by Sottsass for the company in the early 1980s, on the other side Gamper’s interpretation of the same material, in three exclusive interior creations.

A creative ‘reconnection’ entrusted to a material, the Alpi Sottsass collection that the company has redesigned (and now it becomes part of the wide range of Alpi woods), evoking its original design and colors in four variants: red, orange, brown and Grey. The vibrant language of the designer emerges from the enhancing of the design created by the natural veins that enhance the warm hues of the woods.

The original identity of the material is not overridden in the interpretive design of Martino Gamper, on the contrary it enhances its value and main features with a combination of games and overlays. Cutting the material by following different inclinations and obtaining three different designs of the grain, recapturing and then re-assembling the pieces, a new pattern has derived and from it Gamper created a cabinet, a hanging bookcase and a screen, protagonists of the exhibition.

“When I saw Memphis it was love at first sight. I looked for Ettore Sottsass, he asked if we could create for him a very special floor in white and pink wood, all striped like a shirt – says Vittorio Alpi – That was the beginning of long and happy collaboration. ” A synergy that today, in the year that celebrates the centenary of the designer’s birth, finds new surprising expressions.