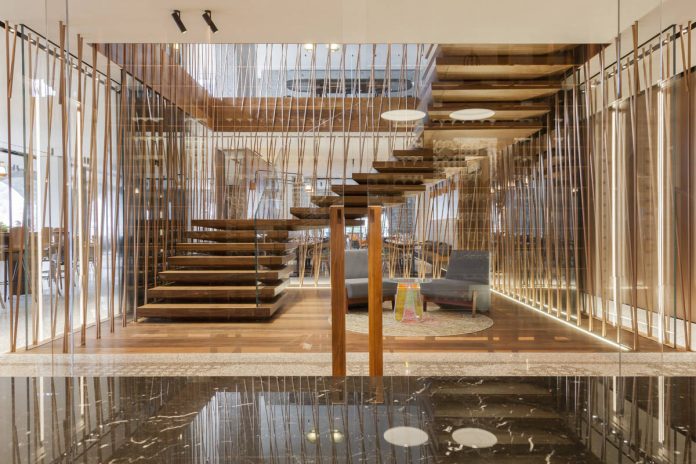 Only 30 rooms, all ‘oversized’ suites. Each room, without exception, enjoys a personal panoramic terrace from which you can admire a spectacular, unobstructed view of the lake and Southern Alps. It is the latest addition to the Sereno Hotels portfolio, the first to be built in decades in the Lake Como landscape. The Lake Como Sereno has a very unusual style. A shape that recalls Giuseppe Terragni’s Casa del Fascio is expressed through predominantly local materials with a contemporary perception. Everything about the project has been considered in its entirety and in the smallest detail, both in terms of architecture and interior design, by Patricia Urquiola and her team, who have managed to fully combine modernity and sobriety. Ceppo di Gré for the facade, wood for the adjustable shading panels of the loggias, Moltrasio and Fossena stone for the floors, Travertine for the walls of the bathrooms; granite, walnut and ash not only create a pleasing contrast with the more classical surrounding structure, but also integrate with the neighboring environment. The place’s scenic appearance and historical heritage have benefited from the precious contribution of Patrick Blanc, a famous French biologist who invented the vertical garden technique. He wanted to create three works for the hotel: a plant wall on the north lake-front side along with two green claws, to highlight the importance of the natural environment. Inside, the obsessive attention to custom design embraces furniture, rugs, wall coverings, lamps and bathroom fittings. There is even a series of pure silk scarfs designed by Urquiola and produced by local companies for the staff uniforms. All customized. Nonetheless, the standout entrance feature is the spectacular, dramatic staircase designed by the Spanish designer in collaboration with the Fontanot company with architect Fabio Curcio Valentini and his company CVHP, which was in charge of project management and supervision of the work. Entirely ‘sewn’ into the majestic lobby, the precious American walnut staircase leads to the upper floors with wide-tread stairs that appear to float in the air. Rather than sartorial art, other areas feature the best of industrial production, indoor and outdoor, obviously ‘made in Urquiola’: Cassina, Kettal, B&B Italia, Agape, Flos, Moroso, Ruckstuhl, Glas Italia perform the delicate task of creating a beautiful living environment. Further adding to its appeal is starred chef Andrea Berton – who has received 4 Michelin stars in his 27-year career – and unrivalled personalized services including 3 boats available to guests, special commissioned by the prestigious Cantiere Ernesto Riva and once again ‘interpreted’ by the highly imaginative designer.