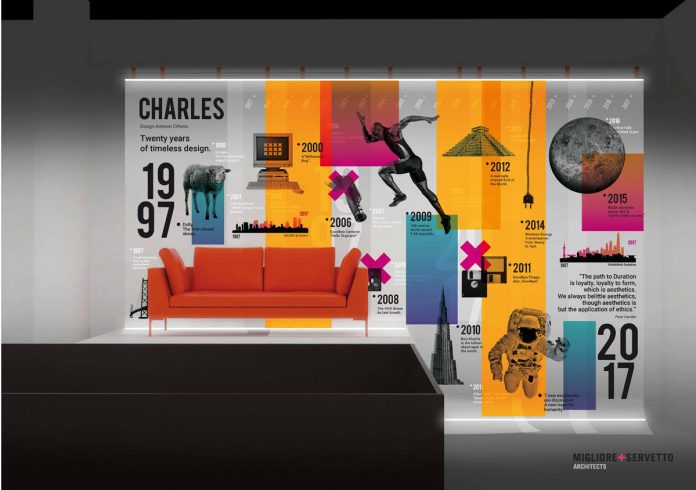 The iconic seating system Charles, designed for B&B Italia by Antonio Citterio in 1997, is 20 years old and the Company celebrates this anniversary showcasing a special version which offer two new coverings in orange/red and grey/blue, shades Charles Eames identified with in the ‘60s.

To illustrate the evolution of Charles 20, Migliore+Servetto Architects has designed the installation that, after the spin-off from Via Durini in Milan, will be declined in B&B Italia stores worldwide.

Here, Charles, framed by a graphic  scenic backdrop, surrounded by history, with its elegance and balance, it represents a constant. Behind it, images from the last twenty years appear – events, objects, scientific and technological discoveries emerge as striking images from the semi-transparent graphic backdrop, in a dynamic overlapping of historical references.

A leading piece in contemporary lifestyle, Charles owes its success to both its shape and aesthetics, and to the research and innovation that went into its design. The characteristics which have made it a contemporary classic are numerous: a slim but strong structure, a single seating cushion, a light appearance accentuated by the essential design of the “inverted L”- shaped die cast aluminium feet. High seat modularity starting with sixteen elements per type and different sizes.

NYCxDesign Awards: triumph for Made in Italy