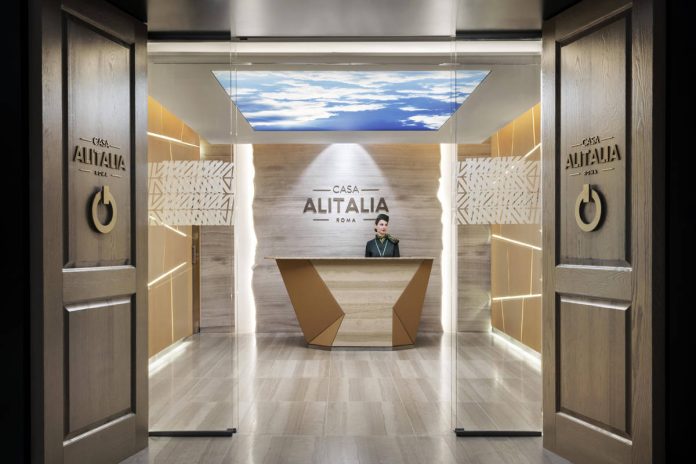 The new Alitalia lounges represent the next step in interior design at airports. IFDM met the architect behind the project, Marco Piva, who explained how the idea came about.

What’s the story behind Casa Alitalia?
Casa Alitalia is part of a strategy aimed at relaunching the company after it became one of the eight international airlines under the Etihad group umbrella. The client brief expressly requested a global feel, a strong message that could work anywhere in the world. The goal was to redesign the image of travel and hospitality, putting a quintessentially Italian spin on it.

From the brief, you formulated an idea that would become the finished product. What did that look like?
We really liked the idea of Made of Italy rather than Made in Italy. All the component parts that make up the new Alitalia image share the fact that they are instantly recognisable as being Italian. We wanted to interact with users not on a business level, but a cultural one.
Casa Alitalia is about more than just interiors. We redesigned the uniforms and even created fragrances. The Casa Alitalia lounges are perfect for those who want to enjoy first-rate airport services and impeccable organisation, but in a setting with a homely vibe. This was achieved by carefully selecting the materials, opting for a sensitive lighting system, arranging the furniture in the softest way possible and going out of our way to ensure the design layout wasn’t excessively rigid – particularly in regard to the way the seating areas and other pieces of furniture were lined up. We also ended up adding a few things in which had seemed a bit too obvious when we were drawing up the designs. For example, we eventually decided to add pasta and pizza to the food area – the two most famous, and perhaps bog-standard, Italian dishes around. As it happened, having the chef there preparing the dishes right in front of you, seeing him work and having that banter and then the ability to choose from a high-end Wine Cellar creates a really unusual, fluid feel. It just works, without falling into the trap of the old clichés.

How important a role did the materials themselves play?
The materials were crucial. We tried to make the space really tactile. All of the marble, stone, leather and wood was analysed at length and selected to create a rich textural tapestry. A lot of work went into colour, too – it became a key component in the interior design project, especially in that way it interacts with the light. We drew on the production capacity and sensitivity of Poltrona Frau Contract to create a series of backlit panels in Pelle Frau®. By combining these with carefully selected woods, marbles and fabrics, we were able to create a fusion of elements which makes for something more than simple decoration, lending an elegant sense of Italian style. We worked with external suppliers for the lighting and light fittings, the combination of which injects dynamism into the spaces. For the Fiumicino lounge, the role of Martini Light was of fundamental importance: the recessed Arkedo fitting, with its asymmetrical lines and compact optics, floods the space with non-invasive yet efficient light. This works in perfect harmony with the natural light streaming through the windows, which look out onto the runways.

What makes the project work on the global scale?
The concept for the lounges represents a base idea which can be tailored to fit other airports around the world. Rome has certain characteristics, Milan has others. New York and Tokyo – which are already in the pipeline – will also have their own distinctive traits.

WAF 2016 votes for the National Museum in Szczecin, Poland as...

A vision of excellence