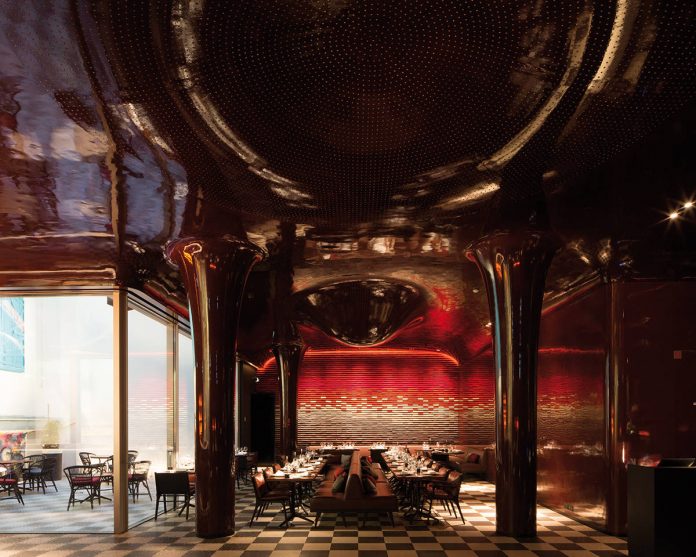 Marcel Proust once revelled in its warm vapours, Depeche Mode took its stage by storm, the likes of Mick Jagger, David Bowie, Jean-Michel Basquiat all partied hard here, the place where Philippe Starck’s name was first launched. The history of number 7 rue du Bourg l’Abbé is anything but dull: the Paris-based venue was once a spa, a meeting place for Bohemians during the Belle Époque, an internationally renowned nightclub frequented by the most famous jet setters, and birthplace of timeless stars. Here, in the heart of Marais, a neighbourhood characterised by a unique style, pride and joy of the third arrondissement, a charming yet transgressive building has been transformed into a clubhouse and hotel, duly called Les Bains, thanks to the artist and filmmaker Jean-Pierre Marois. A profound awareness of the facility’s ‘immaterial value’, owned by his family since the late Sixties, further encouraged Marois’ plans for a reconstruction ensuring the conservation of its memory, even more so than its structure. He explains: “My wish is for guests to perceive the stratification of time on the site, the incredible stories which occurred and the lives it touched”. The award-winning architect Vincent Bastie and interior decorators Tristan Auer and Denis Montel (RDAI), have been entrusted with this delicate task, skilfully maintaining the building’s resplendent aura, with the addition of extremely tasteful and high-impact personalisations. This is clearly visible in the extraordinary façade, an overwhelmingly humane masterpiece, in contrast with a series of interior lacquer red pillars which drip from the ceiling, in a vivid allusion to the building’s spa heritage, merging on the floor. Daring solutions reinvent spaces, in full respect of the building’s heritage. Bastie has succeeded in radically reconfiguring volumes through their amplification.
The location’s spirit is evoked and enriched by new colours, a masterful entwining of past and present offers technological reinterpretations of 19th century allusions. The original flooring is a clear example, restored to create a gradual optical play which progresses, transforming the décor into a suggestive, morphing cinematographic effect. A wall offers further contrast through the simplicity of materials such as porcelain stoneware, matched with the complexity of treatments: one million and 800 thousand tiles, entirely painted, shaped and laid by hand. The curved and perforated ceiling, finished on-site, offers high acoustic performance, thanks to a special finishing.
Integrated lighting, air conditioning and loud speaker elements also contribute towards creating a comfortable and cocoon-like ambience.
The interior designers Tristan Auer and Denis Montel have also worked mindful of this objective, through the creation of cosy and intimate interiors: public ones such as the bar, restaurant, patio and entrance, and spaces exuding diversified moods for private bedroom interiors.
Thirty-nine rooms and suites and a top floor penthouse for a five star experience, conveyed using sophisticated velvets, white marble, fine wood and porcelain and entirely custom-made furnishings. Special tributes abound, such as the special edition rug which pays homage to Serge Gainsbourg, and the sofa dedicated to Warhol, featuring alongside bottles of Les Bains eau de cologne, Le Labo fragrances and satin damask bedlinen bearing the hotel’s embroidered logo. Lastly, the building’s double soul manifests itself at Les Bains in a relaxing and protective daytime ambience which contrasts with exciting evenings animated by music and DJ sets. For a hotel which never sleeps.

Coal Drops Yard is the new hub for the london shopping