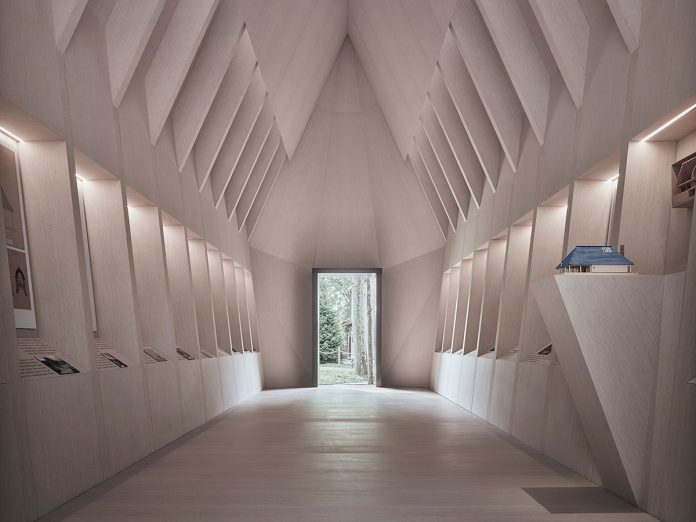 In the wood on San Giorgio Maggiore island, you can follow a route to see all of the ten chapels of the Santa Sede Pavilion, which this year is participating for the first time in the 16th Venice International Architecture Exhibition, or simply wander around and find them among the clearings. Cardinal Gianfranco Ravasi observes that “A visit to the ten Vatican Chapels is a sort of pilgrimage that is not only religious, but also secular, led by all those who wish to rediscover beauty, silence, the interior and transcendent voice and the human fraternity of being together in a gathering of people, as well as the solitude of the wood where you can appreciate the rustle of nature, which is like a cosmic temple.”

The inspiration for the underlying concept of this widespread and open-air ‘pavilion’ was the Woodland Chapel built in 1920 by Gunnar Asplund in Stockholm Cemetery, a site where the Swedish architect worked, together with Sigurd Lewerentz, from 1917 to 1940, the year of his death. Francesco Dal Co, the curator of the entire project, explains that “with this small masterpiece, Asplund defined the chapel as a place of orientation, meeting and meditation, accidentally or naturally formed within a vast wooded area, intended as a physical evocation of the labyrinthine journey of life and of man’s wandering in anticipation of a meeting.”

To explain this masterpiece to the public, the exhibition begins with the Asplund Pavilion, designed by Francesco Magnani and Traudy Pelzel and created by Alpi: conceived as a traditional Scandinavian stave church, its prismatic design is entirely covered in wood and contains a story in pictures with a model and original drawings of the original work.

It is this “little masterpiece” that is alluded to by the ten works scattered through the wood created by ten architects tasked to devise their ‘own’ idea of a chapel, a symbol with great religious and secular significance, and to create a new “type of building” with completely varied architectural values and shapes. A building that exists independently and which is enhanced with different meanings in the abstract landscape of the wood and in the perspective of those who welcome it with gestures and gazes.

Duka for Cave Bianche: wellness in the Nature