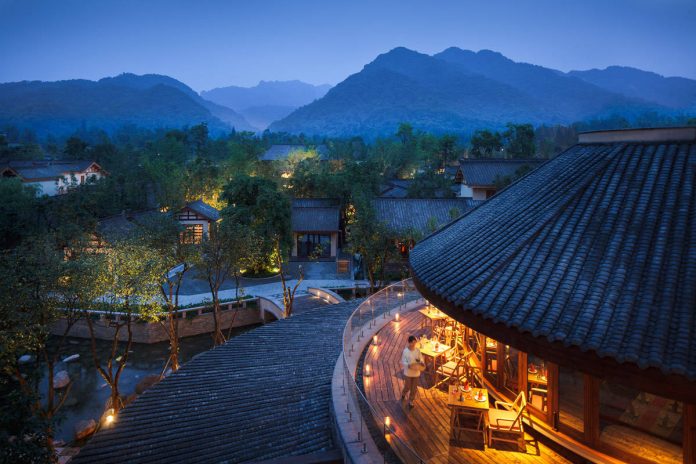 Many boutique hotels established in recent years in various regions of China offer guests the opportunity to appreciate and familiarise themselves with aspects and characteristics that contradict the often negative or superficial image that people have of China when they identify the country with industrialization and desolate buildings, smog and immense, chaotic cities.

These hotels also provide architects with a chance to mix vernacular character with contemporary design content in both urban and naturalistic settings. China is an incredibly rich country in terms of landscape and nature, which is often unspoiled and presents enormous variety and beauty. An example of this is the landscape that you can admire while staying at the Six Senses Qing Cheng resort, situated beneath the Qing Cheng mountain range and UNESCO world heritage site in the region where the legendary Silk Road begins, known for its giant pandas and for the ancient Dujiangyan irrigation system.
Designed by Habita Architects, the resort is immersed in nature and is conceived as a traditional village in which, in addition to a 1,700 sq m spa and two heated swimming pools, 113 residences are available for guests, from suites with balconies or verandas to apartments with a courtyard or garden and villas with a pool. From the interior design to the food offered in the restaurants, the dominant theme is a contemporary, very sensitive, sustainable and ‘organic’ approach to local traditions, encompassing the natural materials that characterize all the interiors, such as bamboo, rattan and stone, the zero-kilometre food cultivated in the resort’s vegetable garden and the harmony between green living spaces that are open to the outside, light colours and natural light.

The small hotel By Spring Villa is also designed as a village (for very few inhabitants) and an oasis of green and peace, despite its very dense urban setting in Chongqing, a densely populated city that has gained renown in recent years for the frenetic development of its real estate, though it has historically been known for its numerous thermal springs. Beyond an entrance similar to the atrium of a temple, the 13 villas – from the Spa House with its two 80 sq m floors to the 150 sq m Small Villa with a private garden, to the 800 sq m Presidential Villa spread over three floors – represent a real retreat from the city with private thermal pools. As with Six Senses, the resort presents a mix between tradition and modernity, but here the atmosphere is decidedly less rustic. The residences, organized around a traditional inner courtyard, combine spacious architecture featuring wood and stone panelling with sophisticated, contemporary décor that alternates neutral shades and bold colours.

The Temple House in Chengdu also has an urban setting. It was designed by Make Architects as an integral part of the cultural and commercial environment around the Daci Temple, which was built over a thousand years ago by the Qin dynasty. Here the union between old and new is made even more apparent by the composition of the building that houses the hotel: two L-shaped towers of various heights connected by a historic building that has been renovated and restored, constructed in the same period as the temple and characterized by the typical low, quadrangular shape, arranged around an inner courtyard, known as Bitieshi in Chinese. One of the new are as hosts 100 bedrooms and the other contains 42 apartments, while the lobby and other common areas are located in the historic area, which has been revived following the restoration of its brick walls, wooden ceilings and floors, stone steps and overhanging roofs. Inside, especially in the guest rooms, the aesthetic is decidedly more modern, rich in colour contrasts, natural and artificial light and textures, with some references to local culture, particularly the tradition of woven materials and the use of bamboo.

A trip within a trip

Face to face with the ocean