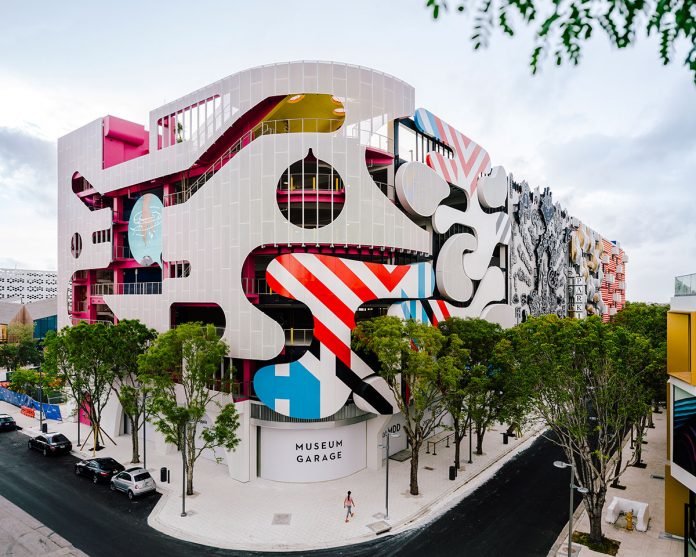 Invented by the Surrealists in 1925 who randomly combined words and drawings in a completely illogical arrangement, the ironic game of the “exquisite corpse” has taken on an architectural dimension in the Garage Museum, which was opened in late April with an architects’ conference and parties on NE First Avenue and NE 40th Street in Miami’s Design District. Located opposite the Institute of Contemporary Art – a recent addition to the District development project completed in late 2017 and designed by Aranguam + Gallegos – the 7-storey building functionally combines – in a simple, yet eye-catching way – two seemingly fundamental requirements for the area, providing a car parking area (with a capacity of 800) to promote luxury shopping and exhibit original installations.

The director of the architectural game was Terence Riley of the Miami K/R (Keenen/Riley) firm, which was chosen by Dacra and L Catterton Real Estate to oversee the project shared with four other international architecture firms: WORKac in New York, German firm J. Mayer H., Spanish studio Clavel Arquitectos, and Nicolas Buffe, a French firm headquartered in Tokyo. All the firms could freely express themselves on a portion of the four facades of the architectural structure, unbeknownst to the others.

The multi-storey car park on 41st Street is accessed through the impressive front, on which elements of Baroque and Rococo style are combined with anime, tokusatsu and manga. Designed by Nicolas Buffe, who took inspiration from his passion for Japanese videogames and animation, the “Serious Play” façade incorporates a dense composition of 2D and 3D elements in laser-cut metal and fiberglass in the perforated sheet metal cladding, while at street level, four 3D caryatids guard the entry and exit.

The section entitled “Urban Jam”, created by Clavel Arquitectos, embraces a theme that is currently fashionable in Miami. The reclamation of abandoned urban structures is represented here with a dizzying formation of 45 cars treated with glittering gold and silver finishes, surreal luxury sculptural objects. The element chosen by K/R for its portion, facing the ICA, is equally trendy and ubiquitous throughout the urban landscape. “Barricades” combines – in a regular formation – the white and orange striped barriers used to regulate traffic during roadworks.

The remaining two installations are joined on the fronts and encompass the corner between 1st Avenue and 41st Street. WORKac’s work, “Ant Farm”, reproduces a cross-section of an ant colony on a giant scale, with activity and connection spaces unveiled (or hidden) by the perforated metal cladding. Dedicated to the theme of social interaction, the center of the facade also contains “Dippin”, a work by New York street artist Jamian Juliano-Villani. The rounded corner features the structure by J. Mayer H. entitled “XOX (Hugs and Kisses)”, which incorporates the shapes of puzzle pieces, decorated with bright lines and colors.

Speirs + Major oversaw the lighting project of the entire structure, engineered by Tim Haahs, to give the Garage Museum a well-defined nocturnal identity.

Face to face with the ocean

The architecture of social change

Four stars without any clouds