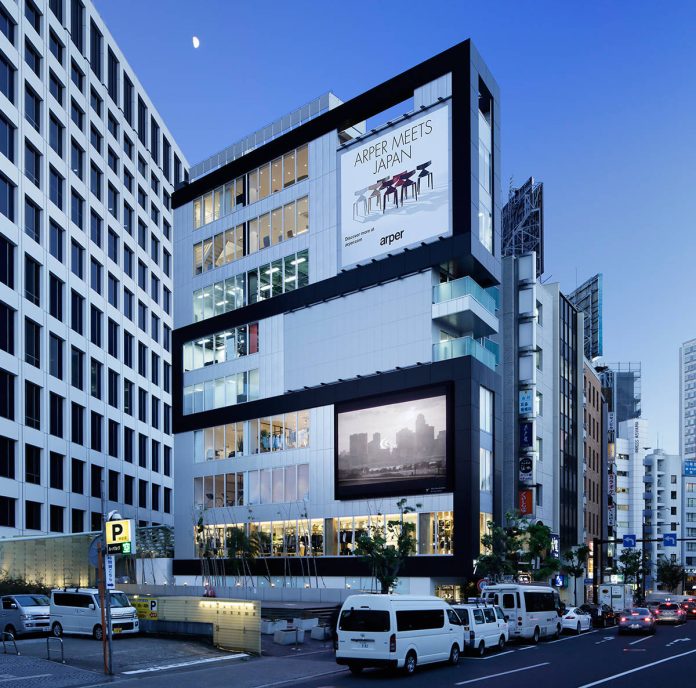 Aoyama design district, Tokyo. Arper opens its latest prestigious showroom in the heart of the city. A space that not only aims to be a recognizable and identifiable showcase for the brand, but also an operational business site. Indeed, it is the headquarters of the Group’s fourth subsidiary, Arper Japan K.K., which will oversee sales and operations in the markets of the Far East: Japan, South Korea and Taiwan.

«The aim is to assure our partners of our presence and reliability and consequently we are already present in Japan with a logistical and manufacturing facility based in Tokyo – explains Claudio Feltrin, President and CEO of Arper – Having a physical presence in the country allows us to respond promptly and efficiently to market demands, applying a model that we have already successfully tested on the US market.»

So not only products, although 300 sq m spread over two floors display the brand’s new additions for 2016 (including the Catifa chairs, the Parentesit sound-absorbing panels, the Meety table system) alongside the most iconic creations (the Kinesit office chair, the Juno chair, the Steeve sofa, the Cross and Nuur tables).

«We are honored to be here: Japanese culture is a source of inspiration in our approach to design and it is reflected in our products. The Arper collections are the result of a creative process that we call “the pursuit of the essential”: unique, simple designs that express timeless elegance. Objects that appear to be the result of spontaneous creation, but are in fact the fruit of rigorous and precise research. In this design approach, we feel that we recognise and deeply share the values and formal rules expressed by Japanese culture».

Arper has four subsidiaries – Arper USA, Arper UK, Arper Middle East and the newly founded Arper Japan –, two branches – Sweden and Singapore – and 12 showrooms in major global capitals: Milan, London, Cologne, Stockholm, Amsterdam, Oslo, Copenhagen, New York, Chicago and Dubai, along with the in-house showroom in the Group’s Treviso headquarters and its new Japanese showroom. It distributes in around 90 countries, with a widespread network of dealers and agents.

Arper recorded a turnover of 67 million euro in 2015, an increase of 23% over 2014, with an expected turnover for 2016 of over 70 million euro. The Group’s EBITDA increased in absolute terms (+20% over 2014). 80% of the turnover is currently focused on Europe, but it is gradually increasing in the USA, the Middle East and the Far East. Italy currently accounts for around 4% of total turnover, while foreign turnover accounts for around 96%.