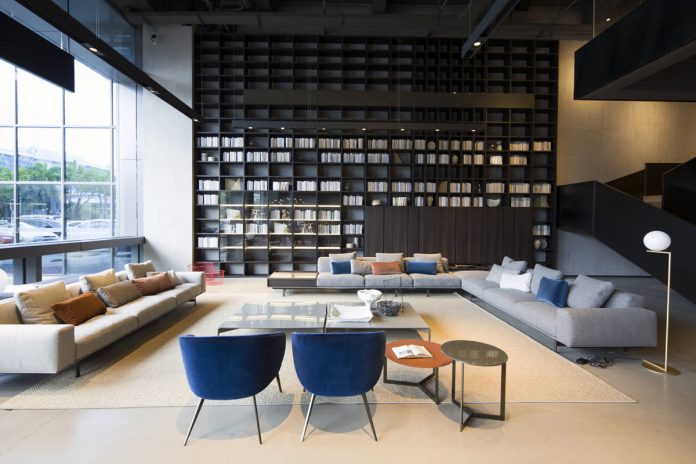 1,200 square metres of pure design and contemporary style. Different settings that tell of a single lifestyle, the Lema lifestyle. The company tells its story in a new display area, the largest it has ever developed the world over, and chooses the city of Shenzhen for this great honour.
The opening follows on from the equally recent openings of Taipei and Pune, and confirms the key role played by Asia in the brand’s international growth process.
The new flagship store, officially opened on 29 October, was developed in collaboration with the local dealer Ubun, entirely given over the the Lema Home systems and collections.

Ambiances for the day and night areas alternate in an extensive area arranged over a single floor, amidst warm, enveloping atmospheres, touches of colour and metropolitan character.
The Lema DNA – linked to the production of tailor-made modular systems – is here represented by Selecta by the Officinadesign Lema and T030 by Piero Lissoni, as well as by the Hangar wardrobes, again by Lissoni and NoveNove by Officinadesign Lema, alongside numerous variants from the Armadio al Centimetro programme.

The ambiances are then further enhanced by a vast selection of best-sellers and recent brand proposals, including the Mustique sofas by Gordon Guillaumier, Yard and Cloud by Francesco Rota, the Galerist display cabinets and the Novelist desk by Christophe Pillet, the Shade table by Francesco Rota and the Memo table by Piero Lissoni.

Making for an ideal destination for architects, designers and contractors, the new showroom perfectly reflects the Lema identity in Asia. Already in Taipei, the company had offered a preview of the internal flagship store opened with the partner Wise Duke, which was then replicated in Pune, in an exclusive showroom hosted in the new Trump Towers and developed with the partner, Spazio.

Mexico City, a metropolis for Boffi