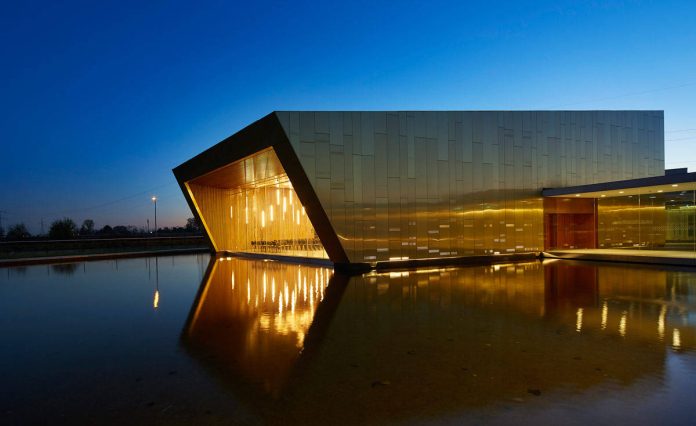 Situated on the banks of the stretch of the Naviglio Grande canal that leads towards Trezzano, the two buildings that make up the cultural centre – a symphony of different architectural volumes – seem to observe each other from a safe distance, separated by a large grassy area just off Via Alzaia Trieste. Each is equally proud of its own identity: on one side the Guardia di Sopra farmstead, an historical agricultural building given renewed life for the project, and on the other the brand-new Buddhist temple/auditorium, which screams contemporary design.

The story is well known. The two “twin” Guardia farmhouses – which belonged to the Visconti family – faced each other for years on the right- and left-hand banks of the Naviglio Grande canal. Time was kinder to one than it was to the other, because while the Lower farmhouse is still in a serious state of disrepair, the Upper was recently bought and converted by the Soka Gakkai Buddhist Association. The renovation and construction project was entrusted to Peia Associati, with Giancarlo Leone and Enrico Colosimo joining in for the restoration phase. Opened to the public in October 2014, the cultural centre – which now combines the ancient with the modern – was designed to be a large communal space and made available to the Corsico council. It has been described as a “melting pot of cultural, social and environmental values – a meeting point and a space for cultural exchange with a physical link to the theme of waterways”.

The two components of the project interact with water in very different ways, however, in a contrast specifically created by the designer. The old building preserves the traditional long, closed structures in the blind colonnade style, facing parallel to the canal in order to protect the main house, stables, stores and internal courtyards, all of which were renovated using philological restoration principles. Meanwhile, the new complex is surrounded by a pool of water, a nod to the design of ancient castles, or Kaikan in Japanese – not by chance is this the name of the temple. The “castle” is formed by a main building, which holds a large, 1000-seater auditorium, as well as some smaller, more transparent structures home to the foyer, reception services and amenities. Yet while the foyer is low and transparent, in order to create a direct link with light and the surrounding area, the auditorium – upholstered with metallic-effect perforated leather in gold – is closed off and isolated from the outside world, with the exception of the large window which creates a visual relationship with the wider complex.

The Ikeda cultural centre is part of the collection Contract&Hospitality – Spring/Sumer Book 2016 by IFDM, also available in digital version.

Pininfarina Architecture in Malta: a center for start-ups and free time