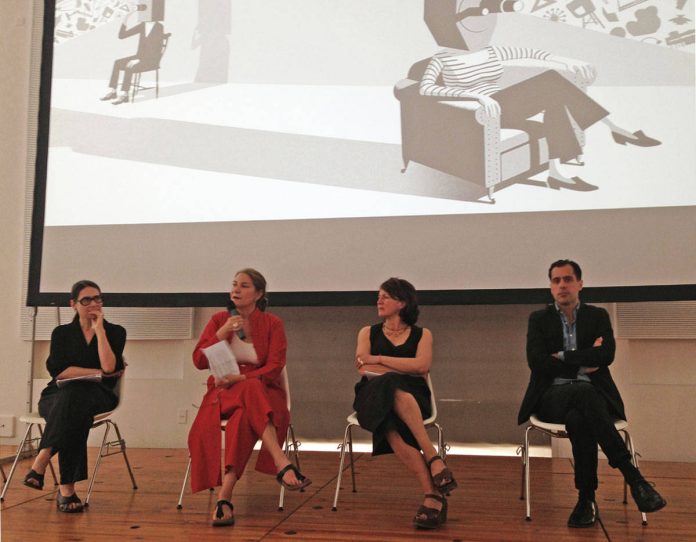 The announcement was made on stage in the Salone d’Onore – Milan Triennale by Antonella Dedini, Silvia Robertazzi, Porzia Bergamaschi and Davide Giannella, that is, the three curators and the guest curator of the Milano Design Film Festival, where feature films and documentaries on architecture, art and design will be shown from October 6 – 9 in the Anteo spazioCinema multiplex.

The new productions that will enliven the atmosphere at the fourth edition of the festival were unveiled yesterday, Tuesday, July 12, and there was no lack of biopics on professionals in various fields, cross-disciplinary explorations of topical issues and national and international previews. In a selection of films grouped under the title Filter. Spaces of moving pictures, Giannella investigates the relations between art and the cultural horizon with an eye on the contemporary.  “Everybody’s aim is to involve the most diverse public possible,” Giannella remarked during the press conference. “But the key lies in the language used; moving pictures are the most powerful and comprehensible artistic expressions possible, with great potential for dissemination.” This is the source of the importance of the event, which is sponsored by the Municipality of Milan and forms part of the Expo in Città platform.

The detailed programme will only be released closer to the opening day but a greater number of screenings than last year has been guaranteed. Thanks to the versatility that marks the project, Dedini and Robertazzi said, “the network of contacts has become increasingly extensive and, for us and all those involved, it has proved full of stimulation and opportunity.”  Bazzea, Ilva and Itlas were confirmed as partners, while the exclusive collaboration was announced with Carmina Campus through the initiative developed by Ilaria Venturini Fendi, who will produce a limited series of bags for MDFF 2016 sewn by the inmates of the San Vittore and Bollate prisons.

The new entries also include Inge de Boer and Denise Houx, Dutch architects who are bringing ROOFmovies to the festival (illustrating certain international best practices linked to the production of edible vegetation in the city) featuring the subject-based seminar ROOFtips and ROOFdinners, a workshop on creating intensive roof gardens. The results of ROOFdinners will be presented during one of the many daytime Master Classes that the festival is running, including one on audiovisual communication for the promotion of design in which directors, filmmakers, multimedia marketing agencies and producers will take part.

The partnership with universities underlines the educational value of the Milano Design Film Festival. The Academy of Architecture of Mendrisio is focusing on six short films under the umbrella of Filming architecture, while the Westminster and RMIT Universities will use a video to explain the new research methods identified through the project ADAPT-r Architecture, Design and Art Practice.

“The event has become known as a cultural platform that is always active,” said curators Antonella Dedini and Silvia Robertazzi, founders of the company that devised the festival, MiCue Milano Design. “The annual October event is the focal point and springboard for collateral initiatives organised in Milan, Italy and abroad.”  These include proposals of the calibre of Watch&Talk with Alejandro Aravena (curator of the Venice Biennale) and Festival on Festival, underway at the Triennale di Milano.

The rhythm of architecture