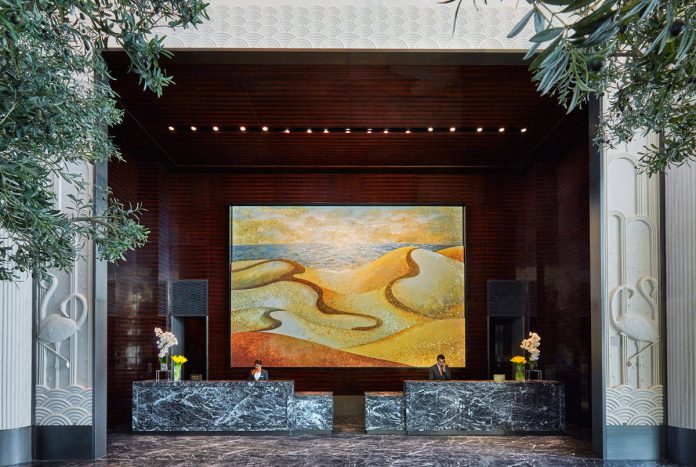 After Washington, Chicago, Prague, Paris, Lisbon, London, Geneva and Florence, mentioned in no particular order and by no means a complete list, Pierre Yves Rochon’s PYR firm also accomplished the interior design of the Four Seasons in Bahrain Bay, completed in the spring of 2015, confirming its long collaboration with the chain dedicated to international luxury hospitality. The skyscraper that houses the five-star hotel was designed by the American firm SOM as an architectural icon about 200 meters tall, constructed on an artificial island built in the centre of the new urban extension, also based on a masterplan by SOM, developed on the waterfront northeast of Manana. A structure consisting of two tall monolithic concrete columns with glass ‘inserts’ that stands as a sort of gateway to the Bahraini capital, a symbol of its highly modern and cosmopolitan identity.

One of the highlights of the 68-storey hotel is the stunning view of the landscape, the ocean and the city, which can be enjoyed from every room and suite. The measurements, use of space and furnishings of the rooms, which total 273 including 57 suites, are designed like luxury urban residences, with decor inspired by the Art Deco style of the 1930s passenger ships that sailed along the maritime routes all over the world. The generous rooms and suites, located on the upper floors (from 170 to 228 sq m), feature large floor-to-ceiling windows and are flooded with natural light that illuminates and brightens the colour mix of the rich palette chosen for furnishings, fabrics, carpets and upholstery. A wide range of green and blue shades, in homage to the seascape, stands out on a more neutral base of beige, black and light brown. The black and white marble in the bathrooms and the dark red mahogany of furniture and finishes complete the colour scheme.

Another highlight of the complex is the numerous, articulated communal spaces  ocated inside and outside, on the ground floor and lower floors: from the double-height glazed lobby to the vast lounge area, furnished terraces, dance halls, modular reception, meeting rooms and spaces equipped as offices. The inside is illuminated with light that resembles daylight and small potted trees  anticipate the vast outdoor terrace area, with gardens, trees, lounge areas and swimming pools.

The nearly 1,000 sq m infinity pool project follows the edge of the island directly onto the mirror of water that comprises the Gulf, with its ‘satellites’, the children’s pool and the Azure, which is closer to the spa and has a whirlpool bath with hot water and private cabins. A fourth pool is located in the health and fitness centre, set in a garden and housed by four separate pavilions, linked by bridges and walkways.

Here the project is inspired by Moroccan and Turkish elements and influences, such as the modern mashrabiyas that guarantee privacy and separation while allowing guests to enjoy light, air and views of the landscape. Moroccan inspiration also features in the Blue Moon Lounge, one of the seven restaurants and bars ‘scattered’ throughout the hotel, each characterized by its own architectural and culinary style. The Blue Moon, one of the three bars operated by Wolfgang Puck and designed by Waldo Fernandez, is located on the 50th floor and, together with the Re Asian Cuisine restaurant which is characterized by Art Deco style furnishing, offers a spectacular view of the city. Descending to the base of the tower, the CUT steakhouse is located on a raised level, connected to its Bar & Lounge, while the Bahrain Bay Kitchen, designed by EDG, is found on the ground floor near the entrance lobby, with a kitchen and outdoor area, along with the Bay View Lounge, with its floor-to-ceiling windows. The Mediterranean Vento restaurant is situated over the swimming pool.

The Fur Season Bahrain is part of the collection Contract&Hospitality – Spring/Sumer Book 2016 by IFDM, also available in digital version.

David Rockwell brings you to the theater