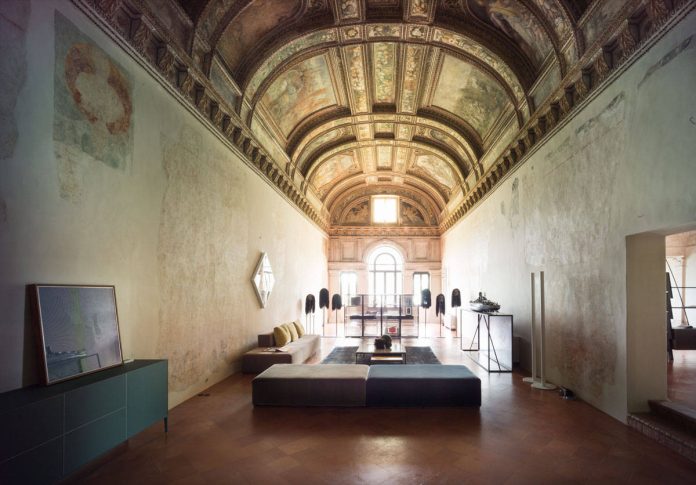 When you pass through the Grande Giardino dei Semplici, the spaces of Estivale – or Rustica – welcomes you. We are confused, not able to identify the historic period of the location. While technology and innovation create the propose of the partner brands,  walls and roof of Palazzo Ducale have Gonzaga’s mark. Credit to Abitare Gonzaga 2016: arte, design e spazi domestici a confronto con il passato (Gonzaga Lifestyle 2016: art, design and domestic spaces in comparison with the past) exhibition, that give an answer to the question: “What would the Gonzaga rooms be like today if the Dukes of Mantua still lived at the Palazzo Ducale?”

First of all, the customized kitchen by Key – realized in collaboration with Studio Benedini Associati – will embellish the Sala delle quattro colonne until the 11th of September. Estivale recalls the name of the location, recently restored after the earthquaker of 2012 and now opened to the public for the very first time.

The project envisages a large island measuring four metres in length with a lava stone floor featuring the installation of latest-generation professional Dutch stoves with doors that have been coated with a non-toxic material, which adheres to the surfaces like a second skin. This material is Matteo Brioni’s Terra Cruda, namely a composition of clay and natural inert materials, whose mustard and slate colours are the result of the mixing of different clays hailing from diverse regions.

Beyond the large island, two cabins house the stoves, fridge and immense pantry spaces featuring doors coated with Matteo Brioni TerraEvoca, which is also natural clay, characterised however by the high-relief technique and is both hand crafted and customisable with different textures.

The art critic Marco Tonelli adfirms: “Abitare Gonzaga is not simply an exhibition, but a temporary experiment where historical residence, environments, objects and contemporary works (not only artistic) establish an original relationship of livability”. A sort of multiple installation, where the present dialogue with the past of the dynasty from Mantova.

Not only Key, but also Agape is one of the main sponsor of the exhibition curated by Giampaolo Benedini. Main characters of the Camerino di Orfeo, Ell and Drop transform the environment in a Bathroom; the first one is a ultra-thin washbasin, the second a bath tube realized in Cristalplant® biobased.

Ideated by the Mantova Creativa association and the Complesso Museale Palazzo Ducale di Mantova, the initiative enhances the history of the city, thanks to the contribution of Giampaolo Benedini (curator), Peter Assmann (director of the Complesso Museale) and Renata Casarin. Moreover, Tonelli selected a series of artworks for the setting, with the support of ADI Lombardia.

Architectural Creativity on Display in Venice