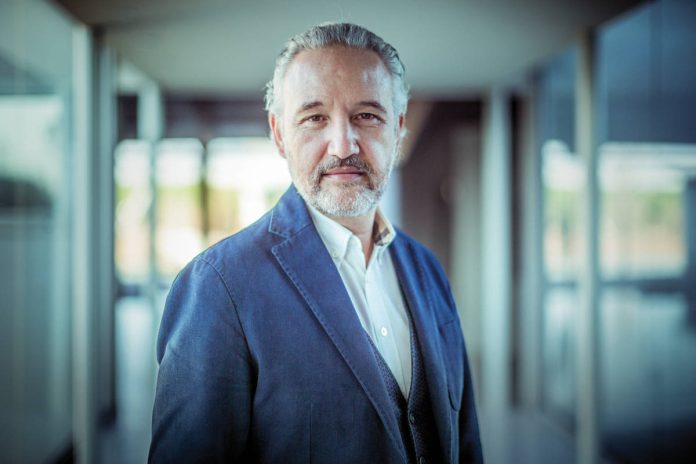 There have been many ‘firsts’ for Foscarini since 1981, which do you recall with most emotion and why?
The best first time is always the next! This reflects the Foscarini way of thinking, concentrating on the present with head held high when looking to the future. In a historic sense, if I were no longer in the company, I must say that there have been many ‘firsts’: when we moved headquarters, when the Milan trade fair moved to Rho but, above all, when we changed the design language of the products. This change took place when we realised that it was no longer enough to talk about the products, we also had to talk about the company. Transferring the solidity and effort abroad and giving a sense of brand required a real transformation of language.

Foscarini and trade: how has the retail chain changed?
For Foscarini, trade is fundamental: The greatest share of our turnover is from our partners’ showrooms.
From my point of view, the big change has been downstream, not upstream, that is, it’s the consumers who are different. Until a few years ago, the role of the retailer was much more central compared to now. Now the distance between company and client has been reduced and the latter has become more expert. In the middle is the retailer, who naturally can no longer be the way it was 10 or 15 years ago.

Foscarini and projects: from the décor to the lighting and the relationship with the contract world. What is the company’s attitude?
Our direct turnover is very low, even the projects go through the retailers, who manage them together with us. Then there are places like Milan and New York where we have our flagship stores that have the task of dealing with the world of interiors. Even though it was established around 36 years ago as a company making tailor-made lighting systems in glass, Foscarini does not have a contract side. The company is currently focusing on a standard product aimed at a certain consumer taste that is manufactured in thousands of pieces a year. Our lamps are very complex and significant from the volumetric point of view, requiring costly moulds (up to €120,000); it would be uneconomical to change them. It must be said that our lamps are present in numerous examples in the contract world, which means that they like them as they area.

In 2001, Foscarini and Marc Sadler won the Compasso d’Oro for technological evolution: is there still room to innovate?
In those days, Marc produced an exceptional work and we did our part. But research, as the famous advertisement says, is nothing without control: this is how we think. We seek creativity but we keep our feet on the ground to ensure that engineering can convert an idea into a simple and beautiful product.
The Danish masters, who still inspire me, said in the twenties that real change can only come from an evolution in the light sources. We are entering a time when LED technology is becoming more stable. The research of many operators in the sector is being focused on certain specifications: in our view, this is the next frontier of the coming change.

Which international markets give you the most satisfaction and which ones will you work on in the future?
Foscarini is a company with a European and Italian soul.
If can we succeed in becoming strong and coherent for that part of the public aware of a simple Made in Italy product with a clear message, we can also succeed in other countries. We are currently engaged in China and especially in Japan, where we have decided to open our new branch and where we think the local culture is in harmony with our lamps and the stories they bring with them.

Euroluce 2017: what are the latest developments we should expect?
Euroluce is another ‘first’. It isn‘t easy to work with Foscarini, it isn’t enough just to turn up with a project, it always involves a long stretch of road on hands and knees in order to achieve a significant result. There are as many as six new collaborations and, as you can imagine, defining and refining them was not a “cake walk”.

Coronavirus, the battle of the world of design continues