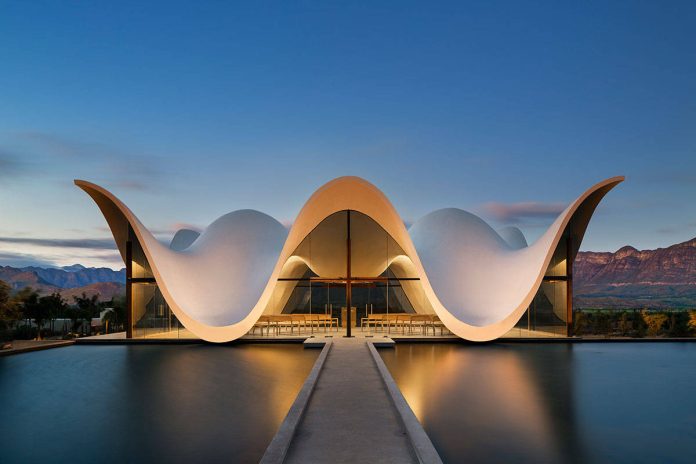 It brushes the land before rising towards the sky with parabolic curves.  The concrete roof, which transforms the church into a kind of sculpture, is a shell resting on the ground that is able to support itself. From above, it seems like a sheet fluttering in the wind, from the front, it is like the outstretched wings of seagulls in flight. In a word, the idea that the South African architect Coetzee Steyn wants to convey is that of lightness.

This project is called ‘Psalm 36:7’, the biblical passage that speaks of the faithful sheltering under shade of the wings of God.

The entire building stands on a stepped basement that tapers upwards, becoming the focal point of the surrounding sun-drenched land, transformed into a green oasis of vineyards and pomegranate trees.

A nearby stretch of water, reflecting the wavy outline, helps underline the structure’s lightness.

The shape is a tribute to the Dutch colonial style of the Cape, or “Dutch Cape”, which draws on influences from the Netherlands, Germany or France and is characterised by the rounded, decorated sloping roofs, which recall the houses of Amsterdam, but also has some Asian elements.   The interior space of 430 square metres has a rectangular plan, like a glass box in which the windows trace crosses on the four facades.  Inside, the windows, bordered by the roof, frame the mountains and flood the space with light, also reflecting on the polished marble floors. The waves that run along the white plastered ceiling create chiaroscuro effects throughout the whole day.  The interior furniture, inspired by the simplicity of the Moravian missions and churches of the 19th century, is austere and simple with wooden benches and a stylised, gilded altar.

Manifattura Tabacchi: a center for the contemporary, in Florence