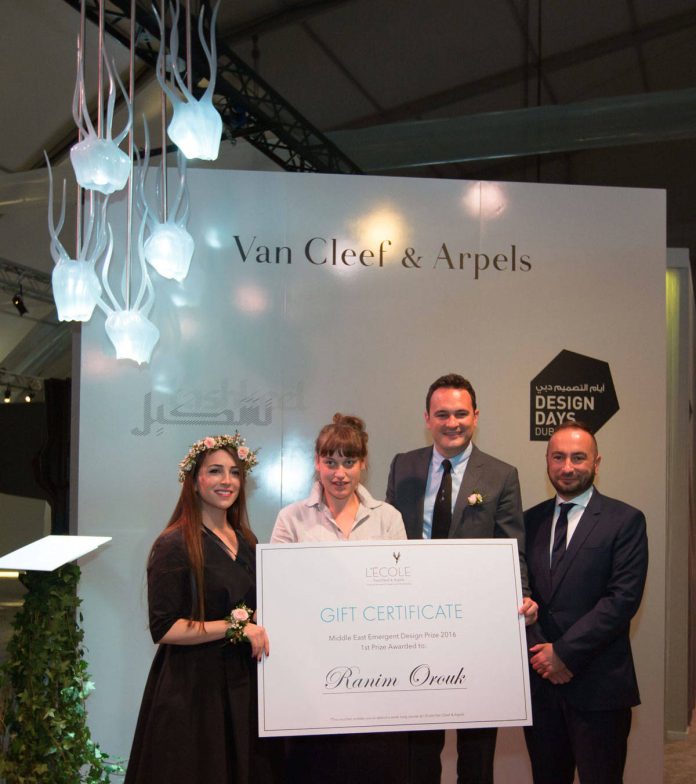 On March 14, during the launch of Design Days Dubai, the architect Ranim Orouk has been proclaimed winner of The Middle East Emergent Designer Prize. Supported by the French brand Van Cleef&Arpels in collaboration with Tashkeel and the hosting international event, the award enhanced Nature, the most representative project for the stated theme. Four are the finalists of Prize’s fourth edition, which has an overwhelming response of applicants: after the winner, the Associate Professor of Studio Art at the American University of Dubai, Michael Rice, followed by the architect and designer Marta Krivosheek and Anjali Srinivasan.

Through the project Glow, the Syrian raised-in-Dubai Ranim Orouk, graduated last year at the American University of Sharjah, elegantly illustrates the aim of the emerging talents platform: working with natural materials native to the immediate surroundings. Thus, a traditional glass blown chandelier shapes into a jellyfish in the Glow installation, now on display at the Van Cleef&Arpels booth throughout Design Days Dubai. Ranim Orouk combines traditional production methods and the innovative 3D print; differently from Michael Rice, specialized in ceramics, that realized Genesis, a crystal bowl recalling the spiral motifs of shells.

Minimae Chair and Vehicular Lens are respectively designed by Marta Krivosheek and Anjali Srinivasan: the first is inspired by various influences, above all by the Arab fishing world; the second one is made up of multiple glass lenses which differently reflect light and space around them.

The Parisian Maison, through his mouthpiece Alessandro Maffi, Managing Director Van Cleef&Arpels Middle East&India, is extremely pleased «to be a part of the developing art scene in Dubai», especially giving international visibility to young promises of design.

Herman Miller and Maars, after the acquisition a journey to NeoCon