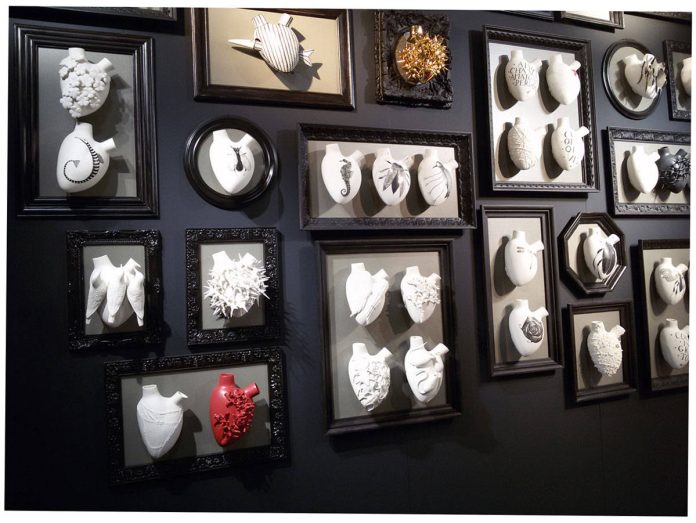 The new Porifera collection of vases and bowls takes inspiration from the sea, a constant theme in recent years, with a focus on glazes: this is a new development for the Faenza-based artisan company, which in recent years has always worked particularly with white textures embossed on the porcelain. “This year we added new glazes to these embossed textures, leading to excellent results,” says the head of the company, Piero Mazzotti. “Glazes with a material effect overlap other glazes, in a series of layers that accentuate the high and low parts of the texture and create a mottled appearance that resembles the colors of the sea floor.” Mazzotti, who has been an entrepreneur/designer for thirty years and a ceramics teacher at an institute in Faenza, is personally responsible for researching the textures and for the development of the technical process that allows them to be reproduced on the porcelain, while his wife, the artist Andri Ioannoi, mainly deals with the glazes (one of her works, part of the Anthozoa collection, was selected by the Milan Triennale Design Museum for the “W. Women in Italian Design” exhibition, open until 17 February, 2017).

The other new addition for 2016 was created in collaboration with ISIA in Faenza and consists of a porcelain vase with gilt reliefs made by taking inspiration from the microscopic enlargement of a flower seed and adding 3D printing technology to traditional clay craftsmanship. “It is a new and exciting process,” Mazzotti explains, “a different way of creating models than the traditional clay method and we will certainly pursue it further.” Indeed, research never stops at Fos, even when it comes to adding new details to embellish increasingly current collections such as Fossilia, Photogenesis, Novalis, Erosum, Antithesis and In alto i cuori, in which the initial four hearts have now become forty-five!

Color and design in the luxury kingdom