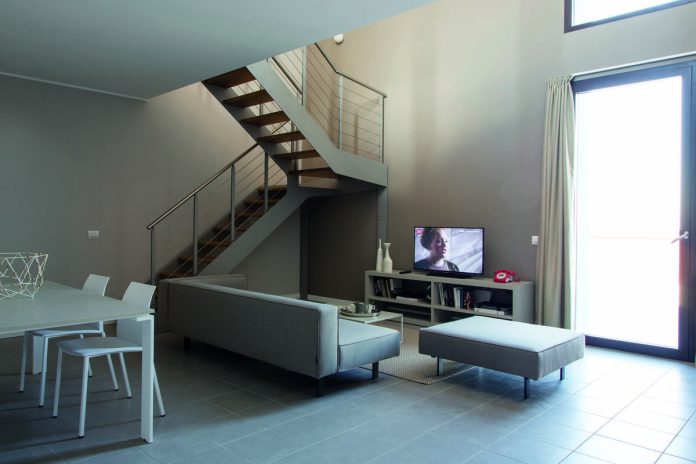 A group of towers in bright, lively colours dominates the Cascina Merlata district, a recently regenerated area situated in north-west Milan, nearby to the Expo 2015 site. The seven buildings that make up the Expo Village proved to be a real architectural challenge in which the Euromobil group took the central role in its capacity as project partner for the supply of the made-to-measure interiors for residences and communal areas.

Seven towers, 30,300 m2 in total and no less than 397 apartments and 1,334 bed spaces. Created by real estate company Euromilano, the Cascina Merlata Village was born as a Social Housing project, with the temporary aim of housing staff and delegations from over 140 countries participating in Expo Milan 2015 (from March until December, including the six-month Expo event itself, which will come to an end in October).

Part of a wider, more complex urban regeneration project, the entire Cascina Merlata district has been designed to house schools, public areas and parks, all of which are currently under construction. The project has given life to an innovative metropolitan residential model at the cutting edge of the industry, particularly in terms of environmental sustainability. Indeed, it is the first residential complex featuring exclusively zero-emissions housing: all of the buildings boast Class A energy efficiency ratings and are powered solely by renewable energy sources. The eco-friendly design and contemporary philosophy of the Euromobil group was perfectly in sync with the architectural project concept.

“We undertook extensive research to identify a target user market that would use the lodgings on a temporary basis. The results led us to establish a target user that was young, between the ages of 25 and 35, probably single but sometimes with a family, had a strong international outlook and was open to sharing experiences and an informal lifestyle,” explains the architect Antinarelli. The interiors were thus developed according to the following guidelines: synthetic, linear design with an onus on comfort and practicality, kitchens with frame structures, cupboards and free-standing complementary pieces.

“The individual parts of the interiors have been designed to guarantee a certain level of transformability and personalisation to the future users of the apartments. This project enables us to be suppliers of the Expo Village today, but in the future it allows us to be first in line to win over the future clients and inhabitants of Cascina Merlata,” states Gaspare Lucchetta. At the end of the Universal Exposition, in fact, the apartments will be converted for what will be the largest Social Housing project in Italy: the subsidised residences will be used to house and allow young couples, single-income families, off-campus students and the elderly to buy property under controlled conditions.

“In the coming years, the social housing sector is going to be the market with the biggest development prospects in the entire real-estate industry. There is growing demand from young couples for the chance to buy or rent a home. Our response was immediate, through a range of products – developed on a largely ad hoc basis – that guarantee the qualitative standards for which we are well-known in the industry. I therefore believe that this project represents both an international showcase, considering the initial users of the Village, and a prestigious opportunity for the Euromobil group to demonstrate its potential,” continues Lucchetta.

On the subject of showcases linked to Expo Milano 2015, the Euromobil Group has guaranteed its own visibility via an interactive installation that is indicative of its trademark way of exemplifying the theme of living. Designed by architects Massimo Antinarelli and Roberto Gobbo, it offers visitors the chance to get to know the Total Home Design concept, which guides the brand’s entire philosophy.