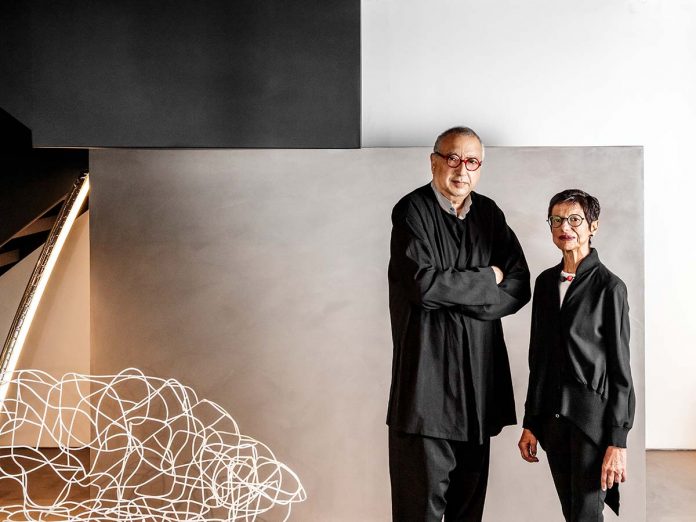 In 1974 Nasir and Nargis Kassamali opened the Luminaire space in Miami, in the belief that good design should be available to all. A philosophy taken forward into the present, through workshops on contemporary design, exhibitions, open forums, educational programs, conferences, seminars, establishing connections between the world of creativity, its different languages and the public at large. The protagonists? International names like Marcel Wanders, Naoto Fukasawa, Giulio Cappellini, Piero Lissoni, Konstantin Grcic, Ron Arad, Patricia Urquiola, as well as highly acclaimed brands like Cassina, Living Divani, Cappellini, Zanotta, Moroso.
With the recent opening in the heart of the design district in Los Angeles, Luminaire continues to be the symbol of an innovative vision of design culture, as Nargis Kassamali explains for IFDM magazine.

How did your passion for design come about, and the idea of creating Luminaire?
I had the idea of opening a design store very early age when I was growing up in Kenya. I was influenced by the Bauhaus and in 1970, I discovered the word “Luminaire” in Paris. When we opened in Miami in 1974, we only carried Scandinavian lighting.

Democratizing design and making it dialogue with the public is one of the philosophies of Luminaire, from the beginning. How did the store start and how has the brand evolved over time?
Back in 1974, the landscape of superior home furnishings was restricted to interior designers who provided consumers with the only means of access to design showrooms open solely to the trade. Propelled by the motivation to remove barriers and democratize design, Nasir and I distilled our long-standing dream into a singular concept: Luminaire. The first showroom specializing in European lighting, opened as a 500-square-foot kiosk in North Miami Beach that year, boldly blazing the path that would eventually make the finest offerings in international design directly available to the U.S. consumer.
We now have four beautiful stores in Coral Gables, Miami, Chicago and now Los Angeles totaling 66,000 sq ft.

How are objects selected and how you understand if a product will become a timeless icon?
Luminaire is more than a furniture showroom. It is an interactive design research center, a playground for the soul, an esplanade for discovery. More than anything else, however, it is a resource focused on creating environments that affect people’s lives. Therefore, every piece is carefully selected to belong to the idea of design as a third skin. I spent time in all the corners of the world visiting fairs, studios, and personally curating timeless designs.

How does the Luminaire Lab concept differ from Luminaire?
Luminaire Lab caters the consumer that reaches the Miami Design District to discover new environments. It’s a destination for experiencing the best in design. We have an outdoor haven built together with Paola Lenti and seasonal exhibitions that entertain while educating throughout the year.

The focus on emerging young people is revealed with the sponsorship of the Salone Satellite Award in Milan…
Beginning with supporting the next wave of great creative visionaries, we have been an adamant sponsor of prestigious design awards in the United States and Europe including the Salone Satellite Awards in Italy. Passionate about helping young designers launch their careers, we are involved in exposing them to the international design scene through exhibitions in our showrooms in Miami, Chicago, and Los Angeles where they are introduced to some of the world’s most important contemporary design firms.

If you were to give your personal definition of “good design”…?
Good design is not a style, it is a language.

Which architects and designers inspired you from the beginning?
Presciently enamored by the work of visionaries such as Le Corbusier, Mies van der Rohe, Alvar Aalto and Arne Jacobsen; my keen foresight stemmed from an intense appreciation for design and grew into a powerful desire to share this knowledge with the public, while making the highest level of contemporary, international products directly accessible to the consumer.

Recently Luminaire opened in Los Angeles. Why LA?
Los Angeles is undergoing a cultural revitalization that has recently seen the migration of artists into the city. With them, they have brought a new sense of vitality that has not gone unnoticed as galleries began to set up spaces in the city as well. This shift brought with it a creative culture that has appealed to a broad range of people including designers, architects, and fashion personalities, especially in the West Hollywood Design District. This cultural climate combined with the economic prosperity of the city has created a unique proposition for Luminaire.

Have products or collections been selected exclusively for LA?
I am truly excited to present for the first time a kitchen collection that I have worked together with this impeccable Italian brand called Minimal. Bringing the brand’s philosophy on total environment design to a new level. This exclusive range of kitchens reimagines the traditional archetype by subtracting the superfluous and focusing on the harmony between form and function. The opening of Luminaire’s Los Angeles showroom also marks the debut of Sollos, a collection of works by Brazilian designer Jader Almeida. With a clear approach to design, Jader Almeida fuses the spirit of modernist architecture with the poetry and vitality of Brazilian customs and craft to create a lounge chair and bar. At Luminaire, Jader Almeida has the freedom to continue his strong work that balances robust structures with other more delicate, even frail elements, as a combination of lightness and strength in a composition full of rhythm.

Among the Luminaire concepts, “pop-up” in which design, fashion, books, coffee, music, screenings, exhibitions, and talks with the most influential designers tell good design. What are you planning for the new Los Angeles office?
With the aim of expanding the repertoire and understanding of design in the communities we serve, we have prepared a local program that will transform the showroom into a laboratory for curated exhibitions, thought-provoking lectures and other types of educational endeavors. Stay tuned for the next one in our illuminate section of the Luminaire website.

Do you plan to inaugurate Luminaire also in other American cities?
Absolutely. At the moment, LA is a strategic decision from an expansion perspective and that’s our main focus.

The strength of the Bull

The human factor and continuous adaptability