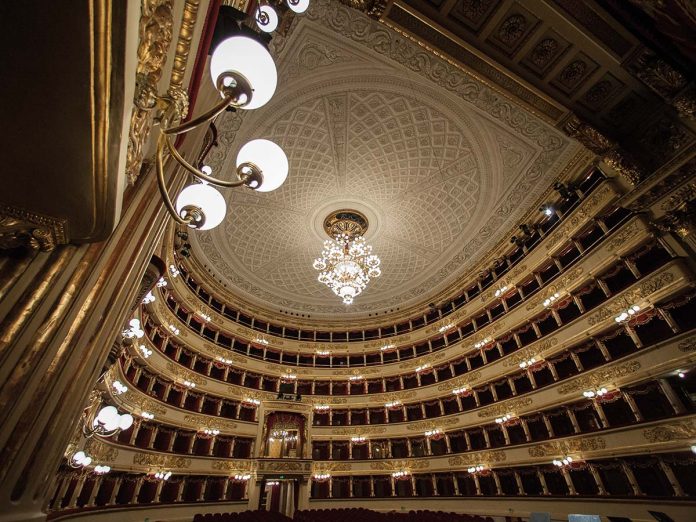 Welcome, have a seat, the curtain rises. A new edition of Milan Design Week, including its key event, the Salone del Mobile.Milano is ready to begin, currently marking its 58th anniversary.
And it is indeed a show of absolute prestige to kick off the most followed and loved week in the international design scene: in the setting of the Teatro alla Scala, Maestro Riccardo Chailly conducts the Overture to “Semiramide” and “William Tell” by Gioachino Rossini and “Pictures at an Exhibition” by Modest Mussorgsky in the orchestration by Maurice Ravel. In the wake of an ever-increasing and profound connection with the city of Milan in the name of culture and creativity, the Salone del Mobile has in fact signed a three-year agreement with the Teatro alla Scala Foundation that will accompany it to 2021, the year that marks the Event’s 60th anniversary.

The Rho event is itself the theatre of new ‘performances’, in the year in which the biennials of Euroluce and Workplace 3.0 take centre stage. The latter in fact presents itself with a renewed, widespread and transversal exposition method, which therefore reflects the evolution of the working environment into a flexible space, open to sharing of a professional and personal nature; the companies of the sector find space throughout the trade fair area.
Making its debut also for the multisectoral area is S.Project (66 participants in halls 22-24) dedicated to design products and to decorative and technical solutions for interior design.

The whole city becomes a theatrical backdrop for a fibrillation of initiatives that embrace every aspect of art, culture, and design. Or a mingling of the three, like the inauguration of the new Design Museum of the Triennale of Milan on Monday 8 April, when the dance of the FuoriSalone also starts. The districts of Milan compete for the spotlight: first and foremost, the Brera Design District, which on the theme “Design Your Life” has in store over 150 initiatives involving more than a hundred showrooms in the neighbourhood; the 5VIE district is becoming more and more animated, and during the Design Week proposes exhibitions and debates up to the highly expected, as well as unmissable “Design Pride”; a series of installations scattered throughout the 16 Ventura Centrale warehouses, an event that expands geographically at the BASE with the Ventura Future exposition; BASE that once again becomes a fundamental stop in the context of the FuoriSalone aimed at the discovery of ‘out of the box’ designs (for the first time this year is the entrance ticket must be paids). And still more, Isola Design District, Tortona with the ultra-innovative and exuberant “Superdesign Show”… Actors, take the stage!

From Alf Da Fré to Alf Group, a 65-year journey