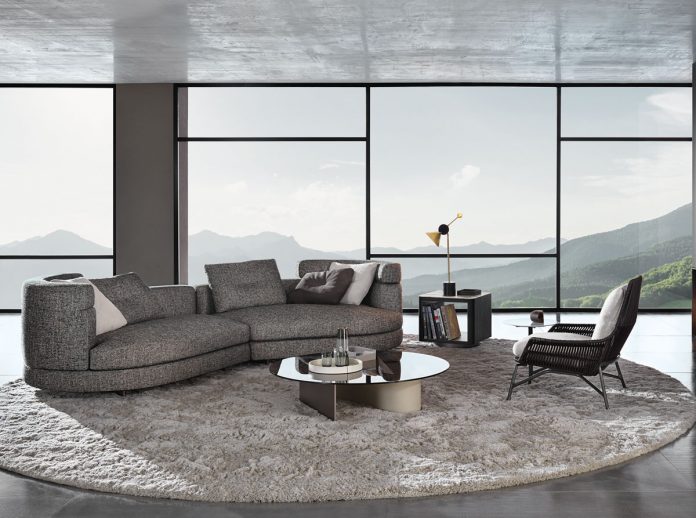 Minotti is one of the company’s that will be present at Imm Cologne 19, not only with its elegant décor, but also with a series of events organised to celebrate 70 years since its foundation.

Retracing the company’s most meaningful milestones, this international initiative, in cooperation with various Minotti partners around the world, reveals the projects developed for the anniversary – the Albert&Ile special editions and the “Minotti Undiscovered.A Matter of Style” documentary-film – to architects, designers, design connoisseurs and journalists.

Among the products present in Cologne Alexander, is a seating system with different forms that can be combined with each other. Squared and curved elements can be used together in the same composition to create areas with an intimate and enveloping atmosphere.

Recalling the composed style of the Fifties the Russell family consists of a variety of typologies of great appeal that range from the enveloping armchair to the elegant lounge and dining armchairs, the bergère, the soft sofa and the ottoman.
The shape takes up vintage lines, modernising them with an incredibly sophisticated silhouette that involves both the seat cushions and the external covering, which comes in fabric or leather, for a combination of textures of great charm.

Granville is available both in the traditional sofa option and as a more flexible solution of detached islands. Joinable together, the various elements come without fixed backs and armrests and are characterized by the original curved shape of the removable armrest.

Tape, with a name derived from its couture detail, is the work of Japanese designer Nendo, who wanted to upend the traditional concept of legs which emerge from the body of the chair, and instead position them external to the structure.

But that’s not all. Minotti also comes to Cologne with outdoor furniture. In particular, the Quadrado modular system, designed by Marcio Kogan. The Brazilian architect created a wooden base which embraces padded cushions supported by a rattan backrest, either in irregular brown tones or in solid licorice black.

Kogan was inspired by the Japanese metabolist architecture of the 1950s and 1960s, characterised by modular volumes.

Franke: the kitchen is no longer the same