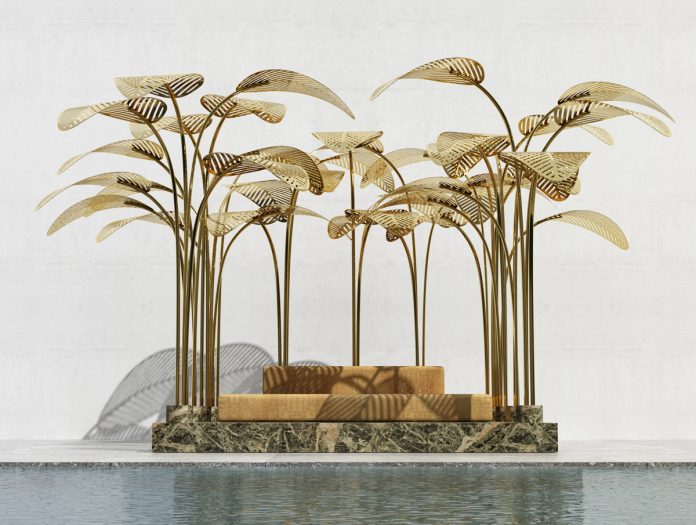 Dubai Design Week aims to surprise and impress visitors, press and industry experts. A full design experience: installations and events will animate not only the districts but every corner of the city. The event organizers planned more than 230 events: a tight schedule that aims to meet everyone’s needs.
Appointments not to be missed:

Vision | Mission is a mise en abyme (a technique of placing a copy of an image within itself) of two noble leaders: Sheikh Mohammed and his son Sheikh Hamdan.
Presented back to back, the piece invites visitors to reflect on the culture of leadership across generations.
The installation was accomplished by playing with layers, simplifying the contour lines of the Sheikhs portraits, yet modelling enough details to express a depth and an intriguing confusion to give maximum realistic effect.

The Mesh
Commissioned by d3 as part of the ‘Design for Good’ initiative, the installation created by FNMI & Roudha Alshamsi (their third collaboration) is a tribute to the traditional artisan techniques (such as weaving and carpet making), inspired by Afghan yurts. It is a triadic structure offering islands of shelter and relaxation, outdoor recreational spaces that accommodate hammocks, swings, seats, as well has hosting events and shows.

HousEmotion
Here is a meditation on the emotional significance of “house” by Tabanlıoğlu Architects. The pavilion designed by the Istanbul studio, which also draws on a study by the psychoanalyst DW Winnicott and his work “Home is Where We Start From” and which was also presented at the London Design Biennale 2018, starts from the simple idea of the cube shape: it is formed of a series of white bars that mark out the space with semi-transparent effects and that light up at night; at the centre is a soft seat that recalls the maternal womb.

Matteo Brioni
A dual appearance at the Design Week for Matteo Brioni who, as well as being the central figure of Downtown Design with ‘La Boaserie’ on walls in TerraEvoca (the project on interior decorative finishes), is also the technical partner (together with Delta Light) of the installation designed by ANARCHITECT with TerraPlus Cammeo which covers the steel structure. The installation investigates the human circadian rhythm and the relationship with the light of the sun and the moon.

Parametric Surfaces
On the occasion of its 20th anniversary, the design brand (sister company of ASZarchitetti) explores the most futuristic areas of the field of design. The project Parametric Surfaces – which is formally presented as a three-dimensional frame suspended in the air – combines the beauty of a sculptural element with the essence of augmented reality, creating multifaceted surfaces starting with sound absorbent materials.

Urban Commission
The winner will be announced during Design Week of the fourth edition of the contest Urban Commission, an event supported by the Dubai Culture & Arts Authority and d3. Each year, designers who live in the Emirates submit their urban furniture products to the competition, the subject of which this year is “Water Feature”; the winner has the opportunity of seeing their work installed permanently in the pedestrian area of d3. Last year, it was won by SUPERFUTUREDESIGN* with their Communal Table MuTable.

Le Refuge
Downtown Editions | Downtown Design
The most instagrammed installation of Milan Design Week 2017 is set to conquer Dubai. A new version of Le Refuge is presented at Downtown Editions, by the designer Marc Ange, who abandons the previous pink touch in favour of a more noble materialism (featuring large gold plated foliage as well as a marble base). On the occasion, the designer also exhibits the home accessories collection by his furnishing brand LJ Edition.

Smania.The journey to the East continues