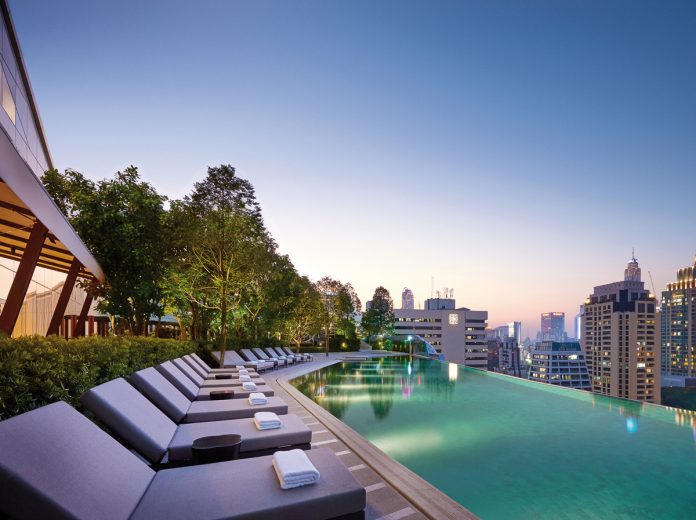 Bangkok is without doubt one of the most alluring – and complex – capital cities in Asia. It is vast, highly polluted and extraordinarily vibrant. No longer is it merely “an expanse of brown houses of bamboo, of mats, of leaves, of a vegetable-matter style of architecture, sprung out of the brown soil on the banks of the muddy river”, as Joseph Conrad described it in The Shadow-Line in the late 1800s.

The modern-day Bangkok is a dense metropolis of buildings high and low, where not even the wind is able to permeate its nooks and crannies. The tropical climate forces temperatures to the limits of the bearable, while the dense population means it is difficult to create open-air spaces. Yet in comparison with the hubbub that characterises other Asian cities, where a lack of ideas often leads to a hodgepodge of styles, in Bangkok – thus far, at least – new architecture trends are all following a similar pattern. There is one exception to this succession of similarly basic structures, however: Central Embassy. This winding mass unfurls itself in all its iridescent glory for a full 37 storeys and though it is one single architectural entity, it is a mixed-used facility.

There is a “podium” dedicated to commercial activity and creativity, before the building surges upwards around two vertical shafts, opening out onto the gardens and balconies of the five-star Park Hyatt hotel. This extends up to the very tip of the tower, occupying a full 27 floors of the building. The complex – designed by the studio of British architect Amanda Levete – takes its name from its history as the location of the former British embassy and stands on the main commercial road in the city. The façade of Central Embassy draws inspiration from the textures and intricate designs of traditional Thai architecture, but brings them up to date using innovative digital projection technology. The building is clad with 300,000 3D sections in aluminium, each one featuring two reflective surfaces. The pieces are arranged in such a way that the natural light and reflections create a rippled, lustrous pattern all over the building.

In plain English, there are restaurants, bars, bookshops, children’s play areas, iconic retail spaces and co-working spaces. The Klein Dytham Architecture studio, which was behind the design of Open House, has created a fluid space with a minimalist style accentuated with modern aesthetic features. Organic features and plants are all around, giving the spaces a human-centric, family feel (something the furniture also contributes to).
The high-ceilinged rooms look out onto the central plazas, while the dominant white colour is interrupted by ceiling mirrors and a stunning decoration made up of 9600 hand-painted leaves. Moreover, each restaurant features huge, totemic structures which differ in their design and use of wood, adapting to reflect the type of restaurant and helping to mask tubing, pipes and cooker hoods.

The interiors of the Park Hyatt hotel, designed by Yabu Pushelburg, reflect the rest of the complex in the sheer level of attention to detail involved. The clean, understated design favours subtle, neutral colours and only uses black for synthetic details. The 222 rooms – including 32 premiere suites – are large in size and all feature floor-to-ceiling windows with views over Nai Lert Park. A welcoming reception area, bar and panoramic terraces are accessible from the hall, which is furnished with Guscio armchairs by Antonio Citterio for Flexform. And because art has always occupied a place of utmost importance for the luxury US chain, the communal areas are home to two installations by Japanese artist Hirotoshi Sawada. Both are suspended in mid-air, one using hundreds of tiny, copper-coloured conical pieces to recreate the reflection of a pagoda on water, the other featuring sleek poles to build the silhouette of a mythological dragon.

Paras Cafè, or the Mediterranean according to The Swimming Pool