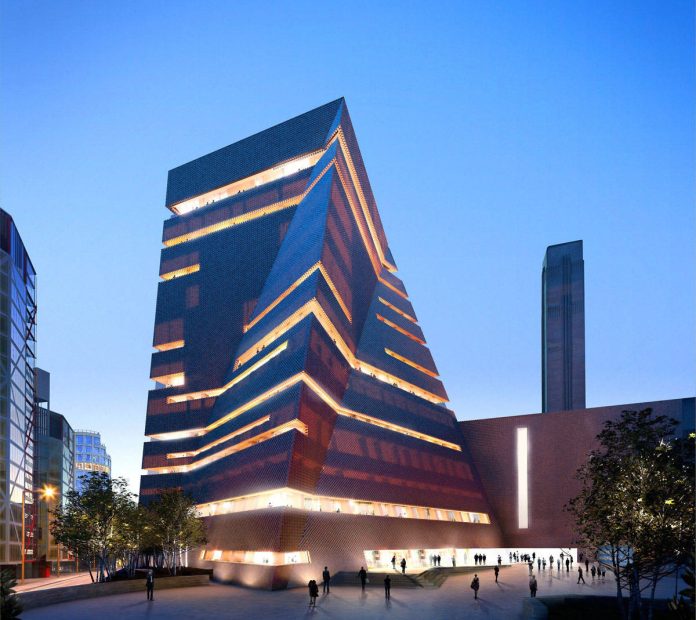 Tate Modern gallery always amazes the public. Modern art collections are hosted not only in the historical building of the Bankside Power Station – HQ of the modern and contemporary art museum since its foundation, in 2000 – but now also in the new Switch House building. The tower – that is 65 m high – has 10 levels and more than 22.000 square meters of surface. For the occasion, the architect Herzog & De Meuron collaborated with designer Jasper Morrison and landscape architect Günther Vogt, restoring the original creative team.

Recently inaugurated, the Switch House is connected to the existing building through an external boardwalk. A connection also virtually confirmed by the reinterpretation of the power station’s brickwork in a radical way. The new building is located on top of the Tanks, the cylindrical underground chambers, the first museum space dedicated to live art, installation and film. They form the physical foundations of the Switch House and the conceptual starting point for it, offering new kinds of spaces for a new type of museum. Above them are three additional floors of world-class galleries with a wide palette of volumes, from intimate small-scale environments to dramatic top-lit spaces. They are complemented by extensive areas dedicated to learning and interpretation, as well as a new restaurant, bar and Members Room, topped with a public terrace offering 360-degree panoramic views of London. A new bridge across the Turbine Hall joins the existing Boiler House galleries to the new Switch House galleries, focusing the attention on the Hall. The latest work to join the collection – at the center of the Hall – is a huge sculpture of a tree created by the artist Ai Wei Wei. More than 300 of international artists are hosted in the museum, such as Mark Rothko, Agnes Martin and Henri Matisse.

The launch – that involved 3.000 school students from around the UK – started three weeks dedicated to live art. For the inauguration, the new store – designed by UXUS – at the base of the new building has been also presented. The different product zones are reinforced by the material palette, which uses different accents of wood within the display modules.

Many foundations, artists and private institutions – such as the Southwark Council, the Blavatnik Family Foundation and the Artist Rooms Foundation – supported the project, contributing to the expansion of an international, famous museum.

Residenza Hortus, the hand of time

The five moods of the new Refin ceramics