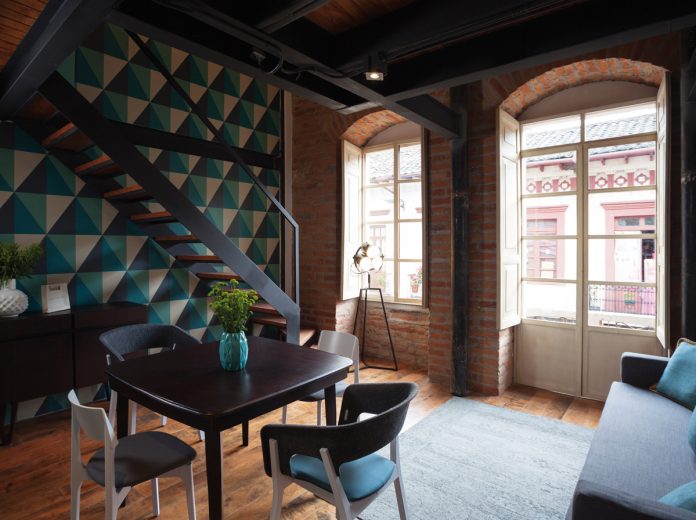 The key protagonists in this latest chapter in the story are Carlota’s grandson, Renato Solines, and his partner Veronica Reed. After finishing their studies, the two returned to Quito, which has been named a UNESCO World Heritage Site, to set up their own studio.

They explain that this particular project occupied their time 24 hours a day, seven days a week, forging a unique bond between the two – who had already been together for over 20 years.
The challenge facing the creative duo was to find a way to marry architecture and design. Their solution? Colour.
The inspiration was drawn from the large variety of birds in Quito and the marvellous colours of their plumage. These tones and shades can be found in the rooms, on the wallpaper, on the walls themselves and in the furniture. The bird connection is further emphasised by the logo of the hotel, created by designer Pablo Iturralde.

After speaking with Carlota herself, Iturralde created an O in the shape of a suitcase, with a blackbird – one of Quito’s most common birds – perching on top. The family-run hotel – which was crowned South America’s Leading Design Hotel for 2017 by the World Travel Awards – has 12 rooms as well as communal areas open to both guests and local residents, including a bistro, rooftop lounge with view of the city’s historic centre, urban garden and a well-stocked wine cellar.

Built in 1905 by a French architect, the residence has a continental feel to it, with the original splendour conserved yet brought up to date. The building still has its original two storeys, with an internal courtyard serving as the lobby, creating a visual connection between the main entrance and the rear patio, with its stunning stone staircase.

The rooms and suites range from 12 to 40m2 in size, with views of the road, courtyard or garden. Esmeralda features shades of turquoise and green, while Brujo has a vibrant red theme, Campanaria features a mandala design in the walls, Azafran is all about emerald green walls, Mirlo features geometric patterning in white and green and Torito has flashes of yellow. The rooms are named after the various species of bird present in the area. The largest room is Brujo, on the second floor.

Split over two levels, it features a lounge area, dining room and kitchen area, occupying what was once part of the large lounge as it was designed back in 1905. The fully functioning hearth adds to the timeless feel, with walls jazzed up with geometric patterns in red and grey. Each room features wall fabrics in bright colours, exposed brickwork and wood and bathrooms whose tiles offset the colours used in the rooms.

From a circle to a cylinder. A head- spinning museum